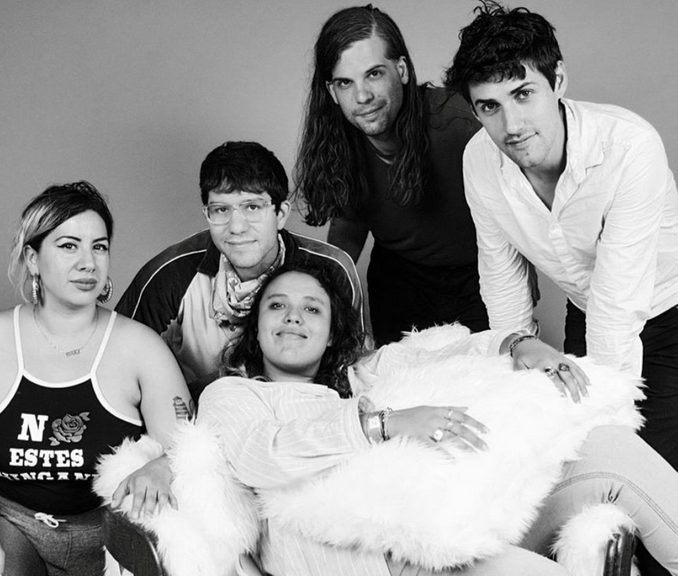 Our single of the week just dropped from our all-time absolute faves Downtown Boys – a glorious, rabble-rousing punk rendition of L’Internationale that warms our red hearts through and through.

The track comes from the soundtrack to upcoming film Miss Marx – a biopic of Eleanor Marx – to which the ‘Boys contributed “a bunch of music”. We are SO excited for all of this content. DEBOUT!

And now for something completely different!

La Neve is the drag/queer performance dance music project of Joey DeFrancesco, guitarist and co-lead songwriter in one of LOUD WOMEN’s favourite ever bands in the world ever, Downtown Boys. Smoking hot new single ‘Maximum Wage’ is out now and sonically it’s a very different beast to the crashing punk maelstrom of the ‘Boys – a driving digital disco beat with retro synth flourishes that have you reaching for the joystick. The pure punk delivery and themes of socialist insurrection are lovingly familiar though. Hell yeah, wage ceiling now!

The track is the first from La Neve’s debut album, which is coming out this summer. La Neve was good enough to chat to our Cassie Fox about it …

How did La Neve come about?

La Neve started a few years ago when I started doing drag shows with original music at Spark City, the old venue we used to run in Providence. I had done more conventional drag performance when I was younger, but getting back into it I wanted to do something different and sort of use it as one component in a larger dance music project. It’s an important identity for me to be able to express. I write and produce all the music myself, but sometimes live our saxophone player Joe DeGeorge will join me, and on some upcoming shows I’ll have live drumming from Karna of The Kominas. The goal is to make it more of a full band live, because that’s more fun than just playing with a computer.

What in particular sparked this song?

I’m not sure who coined the phrase, but you sometimes hear the statement, “Every billionaire is a policy failure.”  In Downtown Boys, we’ve written a few songs in the past that are just straight up policies, such as “100% Tax,” and I like the idea of a song that can be good aesthetically but also directly propagandize a specific agenda. Extreme wealth inequality – the concentration of such unbelievable amounts of capital in the top percent – has already so thoroughly destroyed our societies and our environment. We need serious, radical new systems to redistribute that wealth. These billionaires are not romantic renegades to be idolized; they are the super villains, true scum who aim to rule over everyone, and we need to take the threat seriously. “Maximum Wage” means cutting off anyone from having that much wealth and power.

What kind of reaction have you had so far to the track?

Definitely lots of support from friends on getting new stuff out there, but otherwise hard to tell. This is still a relatively new project, and the music’s maybe hard to classify, so I’m trying to find who’s into it. I’ll be playing some shows over the next couple months, bringing what I think is a fun live show on the road, so I hope to convince more people what it’s all about.

Looking forward to hearing the album – what can we expect?

The next record is a lot more dance oriented than my previous EP, and has higher quality songs and recordings, so I’m excited to present a truer vision of what this project is supposed to be about. I like to dance, and I like dance music and culture, and I like political art, and I like punk, and I hope in the end the record’s a successful blend of all those elements.

La Neve is clearly different kind of sound to Downtown Boys, as you say with lyrical themes in the same direction. Has electronic music always been a passion for you, more so than punk/guitar music would you say? Or do you love both equally?

I first came to music via guitar music, but for many years I’ve gotten more and more into electronic and dance music. I think you can hear that on the last Downtown Boys record as well, as the music I was writing started incorporating more synthesizers and dance grooves. Some people want to imagine punk as the only politicized music, but from the beginning techno, house, etc., all had strong political underpinnings, and came out of vibrant underground DIY cultures, largely amongst black musicians. I love all these musics and I hope I can integrate them in an effective way.

I must also ask as a huge DBs fangirl … we featured the fab Gauche last week, and seeing the awesome La Neve sproinging into action this week – what does this mean for the DBs?? Say it ain’t the end …

The Gauche record is so great. It’s a funny coincidence we’re putting these out so close together. And our saxophone player Joe DeGeorge also just announced a new record from his band, Harry and the Potters. But then Downtown Boys is also leaving for tour in about a week. There’s a lot going on! The band has been slowing down a bit lately after going really hard for several years. We’re still playing, but in different geographies right now, so I really don’t know what’s next, but we never knew what was next at any point.

What’s next for La Neve – album tour maybe? Outside the US? (London is so ready for La Neve btw, come play!)

Yes once the album’s out I’ll be going everywhere! La Neve is really the more highly realized version of myself, and it’s incredibly exciting to get to do the performance and exist as that person in new spaces. I want to keep building out the live show and I hope to be in London as soon as I possibly can.

Debut single ‘Running’ is out now, ahead of the launch of their LP ‘A People’s History of Gauche’ (check out the limited-edition pink marbled Peak Vinyl, which comes with a flexi of the previously released ‘Conspiracy Theories’).

Gauche open for Bikini Kill in Brooklyn in June, and will be touring North America this summer:

Drumroll please – it’s time to announce the winners of LOUD WOMEN’s Albums of 2017 poll*! And the winners are …

The Menstrual Cramps: We’re Not Ovaryacting

You can check out the winning albums on this Spotify playlist (excluding Nervous Twitch and Bratakus, who are both far too punk for Spotify – find them instead on Bandcamp)

Bilingual sax punks Downtown Boys tell us they’re here to “topple the white-cis-het hegemony and draft a new history”. Listening to their provocatively boisterous new album, Cost of Living, Cassie Fox wants to roll up her sleeves and give them a hand pushing.

The targets in Downtown Boys‘ crosshairs are clear: “racism, queerphobia, capitalism, fascism, boredom, and all things people use to try to close our minds, eyes and hearts”. The tracks on Cost of Living use commanding sloganeering, driving grooves, and catchy sax riffs to cook up one of the most apposite records of the present-day.

This is the third album from the Providence, RI band, and the follow-up to their critically-acclaimed Full Communism from 2015. Released on Sub Pop, but with production by Fugazi/Rites of Spring’s Guy Picciotto, lending a Dischord sound – a touch of the Nation of Ullysses about it.

The effervescent opener, ‘A Wall’, has lyrics drawn from Assata Shakur’s poem “I believe in living“, and Sonic Youth style delivery. The song calls out Trump with a joyful resistance.

‘Promissory Note’ is an unapologetic bird-flip to the band’s censurers: “So what’s the matter, you don’t like what you see? / I can’t believe you’re even talking to me!”

‘Somos Chulas’ (‘We are cool’) is one of three songs on the album sung primarily in Spanish and it’s a banger.

‘Lips That Bite’ is my favourite track on the album, largely due to the rollicking sax instrumental, over some unexpected synth.

Downtown Boys are best served live. Victoria Ruiz is mesmerising in her performance, and the band’s energetic shows are joyful, entertaining and inspirational. True story: when they played in London in 2015, three friends in the audience were so inspired that they formed their own sax punk band on the spot – and my band GUTTFULL was born.

Downtown Boys are currently touring Europe with several UK dates coming up: catch them if you can.

Review by Cassie Fox, originally published on Louder Than War.

A round up of new releases we’re getting excited about.

– Everything is Problematic! LP
Sneaks – Act Out LP