Track of the day today is the mesmerising ‘Butterfly Wings’ from Kat Five (aka Feral Five) – hypnotic electro-pop inspired by Morocco’s Racines and its slogan #LaCultureEstLaSolution. Produced by Kat and mastered by Katie Tavini, nominated for Mastering Engineer of the Year, so it’s a 100% female production.

Kat let us in on the audio magic behind the fluttery sound on the track … it’s the sound of a real butterfly’s wings!

“When I heard the butterfly in my studio I grabbed my portable Zoom and recorded a burst of the wing sound, which was surprisingly loud, before helping the butterfly fly off outside. I keep my recorder handy and often use unusual sounds in my tracks.

Armed with the butterfly recording and an idea, I worked on the lyrics and a melody. I looped and layered the butterfly sound to give a sense of flying around, and I created very sparse beats including a sharp crackle (like a fly zapper) to add a sense of danger. I experimented a lot and it was like painting with sound as I added vocals, synths, and guitar, with the bass more of a background drone. I didn’t want to swamp the butterfly, so tried to create space and depth in the mix, aiming for an organic fragile feel, but with quiet strength too.

Last night (11 May) at the Hope & Anchor was a splendid reminder why LOUD WOMEN gigs are so vital. Four very awesome woman-powered bands from up and down the country, and across the Atlantic (Miss Eaves, TV Face, Feral Five and I, Doris) ; a fun raffle full of awesome prizes (original Bikini Kill poster! records! golden pineapple ornament!); filming for Gaptooth‘s new music video (Post-Patriarchy Disco!); plus the friendliest, most up-for-a-good time crowd you could wish to hang out with on a Saturday night. More of this sort of thing please!

In fact … not long at all to wait until the next LOUD WOMEN supported gig – this Thursday at Paper Dress Vintage you can catch HAVVK, Charmpit, Scrounge and I, Doris

Making a welcome return to a LOUD WOMEN stage this weekend, the awesome Feral Five will spoiling us with the bonus launch of their funktastic new single, ‘Shake It’ – come and do exactly that with us and them on Saturday 11 May at the Hope & Anchor (along with Miss Eaves, TV Face and I, Doris). In the meantime, here’s their 10 question interview …

Lizzo – we’re imagining the flute solo already!, or Kylie Minogue with Nick Cave (we covered one of hers and took it to the dark side). St Vincent would produce an amazing avant-pop thing with our stuff!

3. What was the last song you wrote, where were you when you came up with the idea, what inspired it, and how did it turn out?

‘Ego’. It started with a crazy sample Kat made hiding in the bathroom at Xmas with her new mini synth, and grew in a fit of fury after a run in with an egotistical music biz monster. We jammed it up in a rehearsal studio, it came out disco-sexy good, and it’s going to be our next single!

4. Which was your favourite gig you’ve a) played and b) watched?

a) Shuffle Festival, founded by Danny Boyle – on a platform up in the trees in a gloriously gothic graveyard park. Kat jumped so hard the floorboards started coming apart, and we played an electro-punk cover of Japan’s ‘Ghosts’ that went down a storm.

b) Tough call, but Sleaford Mods, Savages and The Pop Group playing on a truck on the same night at Dismaland is right up there.

c) If there was a category for both on the same day – then Cro Cro Land festival for sure!

5. Recommend a record that you think our readers might not have heard of

6. What’s your best piece of advice for young musicians?

Be brilliant. Be yourself. Experiment.

8. What are your musical goals?

To make people think while they dance in another dimension

9. What’s the most important thing we need to know about your band right now?

We’re launching new single ‘Shake It’ at the 11th May Loud Women show, you’ve summed it up pretty nicely as a “floor-filling guitar-sexy banger”, and John Kennedy’s been giving it a few spins on Radio X! And we’re working on our debut album.

10. Give your top 5 contemporary bands/musicians

Ms Mohammed – brilliant Island punk, gets us moving every time

Bishi – cosmic genius from another universe

Got those back-to-work-after-a-bank-holiday blues? Here’s some audio comfort – whack this famazing playlist in your earholes, stick it on repeat. The week will fly by and before you know it we’ll be seeing Miss Eaves, Feral Five, TV Face and I, Doris live at the Hope & Anchor on Saturday 11 May!

Featured on the playlist:

Massive thanks to Abby/Doris Werth for the particularly choice selections ❤

Out today from London’s favourite electro-punks, Feral Five, a floor-filling sexy-guitar banger. We challenge you not to shake your tail feather to this … and you can shake it live too, as Feral Five are joining us for our next LOUD WOMEN gig at the Hope & Anchor in London on 11 May!

Find Feral Five on Facebook, and catch them live on 11 May with Miss Eaves, TV Face and I, Doris at the Hope & Anchor in London. 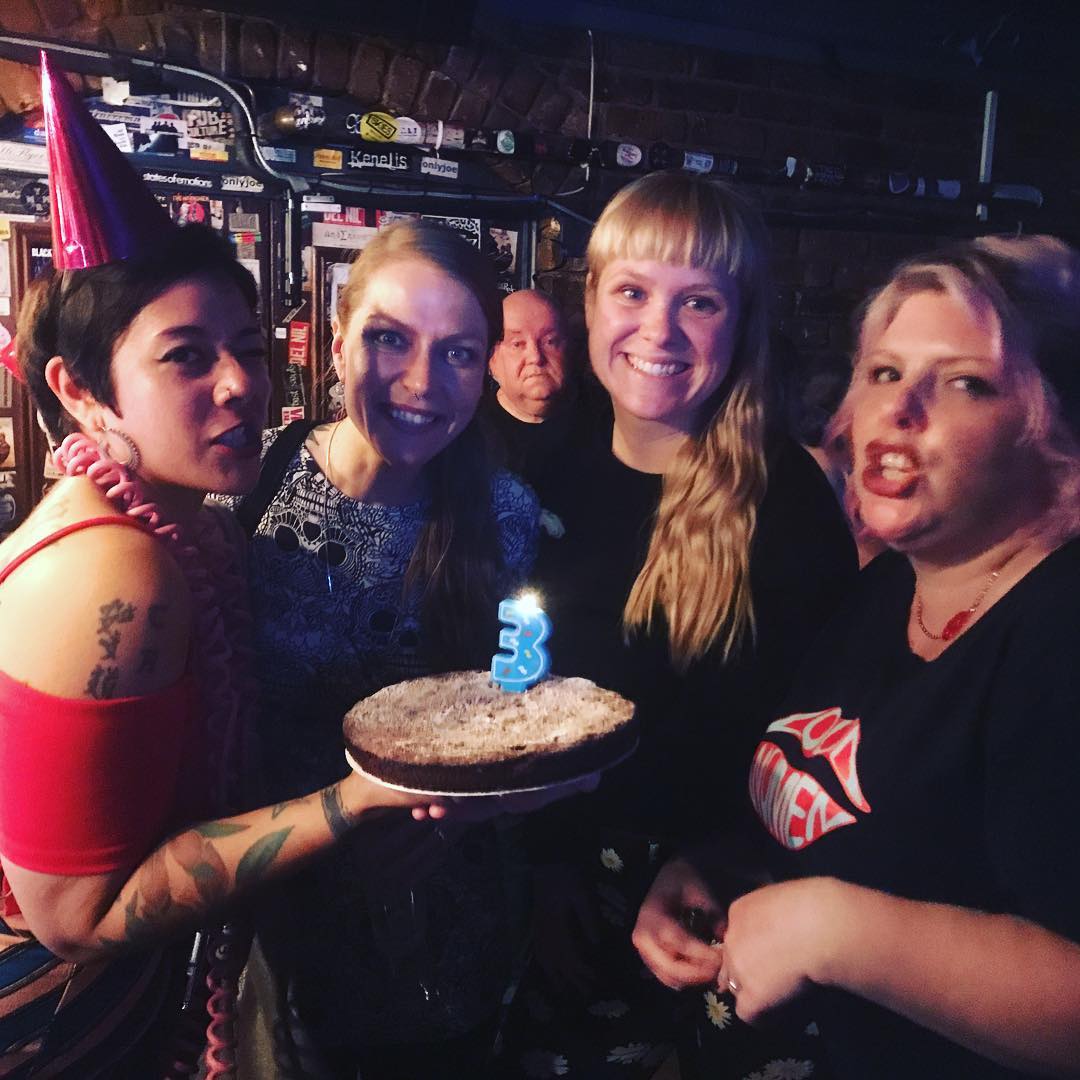 Massive thanks to everyone who came and celebrated our 3rd birthday last night – what an absolutely lovely night, full of friendly faces, brilliant music, and heaps of fun – exactly the stuff of Loud Women! Awesome performances from Party Fears, GUTTFULL, Feral Five and Spare Rib – check em all out online. There was dancing, cake, a fun raffle, and plotting … our ‘woman in the USA’ was in the house and our plans for LOUD WOMEN NYC are coming along nicely – bring on 2019! 💥

LOUD WOMEN has been a thing for 3 years, so we’re having a birthday party to celebrate!

Beautiful Berlin punx Party Fears are coming over to play, and providing a wonderful pun opportunity.

Expect cake and hats and dancing ♥

"I, Doris are not just ‘Mummycore’; they are hardcore revolutionaries, boosting our confidence, prepping us for everyday battle and getting us ready to run a better world in less than 2.5mins." 'Wonderwomen' by @idorisband - review by @iamher_london
Let's start the week with a banger. Bruise Cruise are a fresh young punk hope from Cornwall, and this first release is their themetune – all the best bands have a themetune! #trackoftheday
Balcony Fest starting NOW! loudwomen.org/2020/05/30/wat… 1 HIDEOUS WHEEL INVENTION @louderthanwarofficial 1.20 @firestationsband @sonictonicpromo 1.40 @helloscrounge @joyzineuk 2 @eilisfrawleydrums @loudwomen 2.20 @lejunkk @gigslutz 2.40 @clwb_fuzz @godisinthetvzine 3 @falseheads
Out today, @madamesomusic releases 'Generation Y'
Your Friday Soundtrack today is @tiffskiii 's 'Don't Wanna Talk', out today.
Out today on Beth Shalom records, @pets3matary release their label debut single, 'Get Away With It'. We caught up with frontwoman Gaby-Elise for a quick chat about the release.
My Tweets