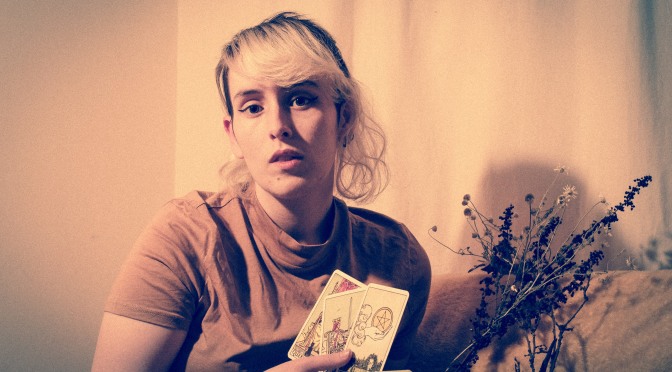 Very excited to bring you today a premiere of the new single from Belfast’s finest punk band, Sister Ghost – Fake Friends. It’s an instantly on-yer-feet fist-pumping anti-anthem for those frenemies who can absolutely do one. The vitriolic lyrics resonate in NI politics, in celebrity Twitter-storms, and in your DMs. Balls to the fake friends, and hurray for Sister Ghost!

“See what happens when the Stormont Ghosts take over Parliament and change things for the better, using nothing but love and common sense.”

For the uninitiated (and those who weren’t lucky enough to catch their outstanding performance at LOUD WOMEN Fest 3 in 2018) Sister Ghost is the the band of musical powerhouse and all round superb human, Shannon Delores O’Neill. You may also know Shannon from the Girls Rock NI chapter, which she set up in 2016.

Fake Friends is out now! Find Sister Ghost on 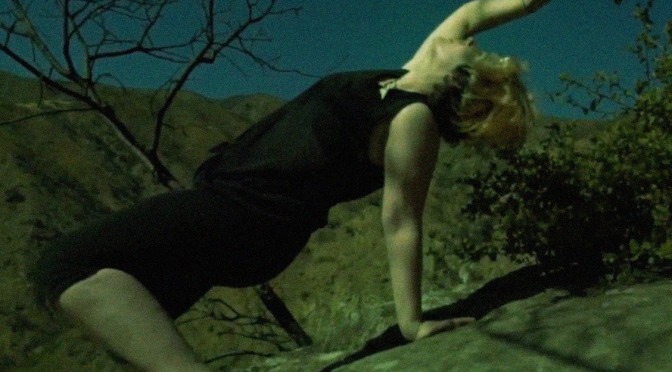 Our video of the day is Sister Ghost‘s stunning new single ‘Backwards’. Not long to go now before we get these spooktacular siblings on a LOUD WOMEN stage again – they’re headlining our St Patricia’s Day Fest on 16 March at DIY Space for London, don’t miss!

Sister Ghost! Tell us a bit about the DIY/punk scene in Northern Ireland?
The coolest spots to play at the minute would be the Art Department, other local art galleries or theatre spaces or BYOB shows in practice spaces (a collective here used to host shows in a house until that got the boot!). Bands we like to play with are Cherym (all-female trio from Derry), Slouch (from Dublin), New Pagans (Belfast/Derry) and some others.
The scene is NI is getting better in terms of the gender divide. I set up Girls Rock School NI in 2016 and since then people have said it’s definitely to thank for helping with the increased levels of women taking up their space in the scene. There is still so much work to be done and still far too many bands full of lads making the same music over and over.
There are only a few managers or booking agents in Belfast/Derry so it’s a case of DIY or die here.
We are SO looking forward to welcoming you to London and seeing you play live, especially after the release of your single ‘Emily’. Tell us all about the song – what’s it about, how did you record it, and what’s the story behind the awesome video?
I wrote this song in my bedroom back home in an evening – it’s very simple so that’s nothing to brag about haha – but it took on another meaning for me once I decided to release it on IWD 2018. I decided to name it after my grandmother (as well as hark to Emily Bronte, Emily Davison etc). In line with that, I wanted to make a video which celebrated 20th century women like those I’d referenced in it’s title. I scoured the internet and archives to get footage and it took a few days for me to make. I really love it and it got a good response on it’s release. It’s also the first Sister Ghost song to have keys on it (which initally I wasn’t sure about, because I’ve always preferred guitars/bass/drums/vox) – it uses the Stooges, QOTSA repeated piano note thing in the verses.
What can we look forward to from Sister Ghost?
I’m currently in the process of writing my first album. It’s such a big deal for me in a way but I think I’m at a place now where I don’t want to overthink it too much; just let it flow. I’ve been recording everything myself using my laptop, Logic Pro x and a Focusrite Scarlett audio interface. It’s been a great learning experience so far and I like to be in control and learn from my mistakes. My aim is to record the best possible demos I can for it and then give it to a few people in the scene that I respect and whose work I love to give me some feedback. I guess after that I’ll see if I can raise some funds to record in a studio – it’s so expensive!
I have a lead single that was recorded back in September 2017 that I have a friend working on a video for. We shot it in the Californian hills of Ojai back in June this year while I was out teaching guitar and band coaching with Girls Rock Santa Barbara. I plan on releasing that song once the video is finished.
Who are you looking forward to seeing play at Loud Women Fest?
I’m honestly so excited to be bringing Sister Ghost to London! It’s also my birthday that weekend too!
Really looking forward to checking out as many as possible really and hopefully make some friends! Wolf Girl are kindly giving us a place to crash while we are over – they’ve been really helpful and friendly and we haven’t even met yet!
Tell us anything else you think it’s important we know about you/your music!
Sister Ghost is all about being true to yourself, taking up space and making peace with your past… oh and owning your anger and curiosity!

This year’s final line-up for LOUD WOMEN Fest has just been announced, and now includes worldclass artists She Makes War and Efa Supertramp! Here’s a taster of how it’s going to look …

This, the 3rd annual LOUD WOMEN Fest will showcase 21 punk and indie acts in 1 day, over 2 neighbouring stages – The Dome and the Boston Music Room, Tufnell Park, London. Last year’s festival massively sold out, so early ticket-buying is advised!

Plus DJs including Mammory Tapes AND cake stall from Ladies of the Lock – The WI group for Camden, Kentish Town…

This year, we’re taking over The Dome, Tufnell Park and Boston Music Room. Using these two amazing, world-class neighbouring venues we can keep the music constant throughout the day, and make our Fest bigger and better than ever!

Expect:
* Delicious hot food and cakes.
* Stalls with zines and goodies.
* The best damn day/night out of the year.

Applications from stallholders and zine sellers, other kinds of performers that we haven’t even thought of yet, and any other enquiries to loudwomenclub@gmail.com 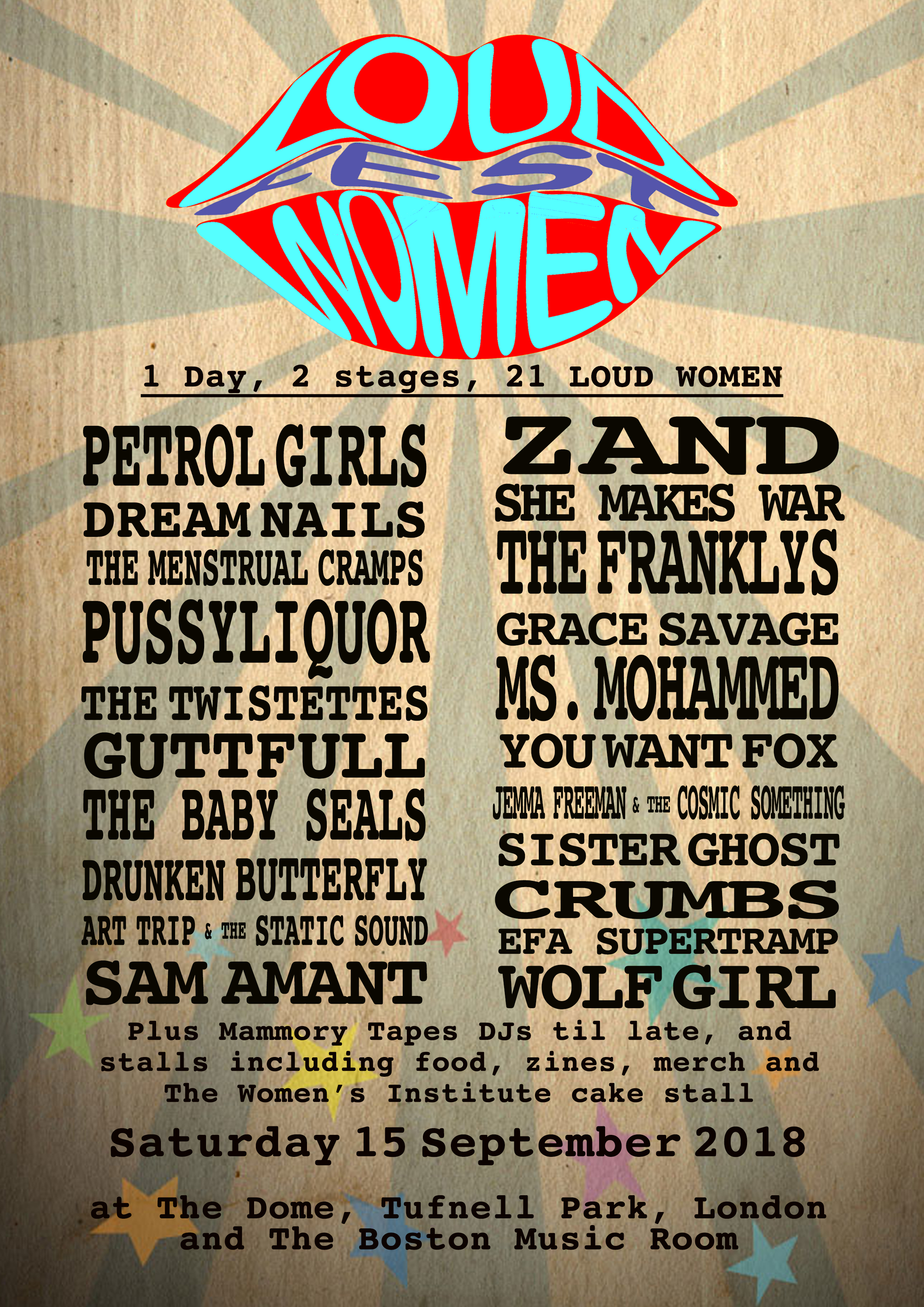 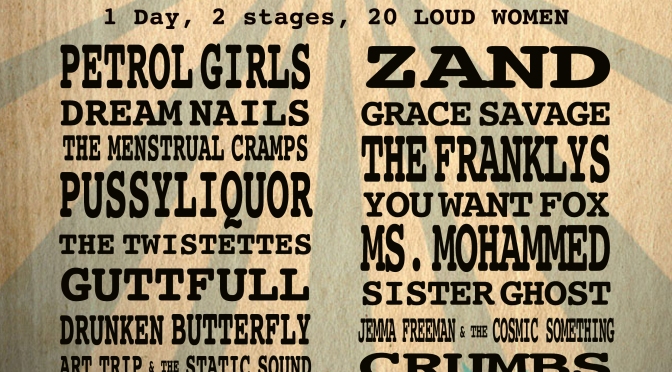 LOUD WOMEN Fest is back in 2018 – bigger and louder than ever! Building on the massive success of our last two Festivals, we’re expanding to two much larger venues: The Dome, Tufnell Park, and Boston Music Room

Plus DJs including Mammory Tapes and more bands TBA – watch this space!

Stalls, zines, food, AND cake stall from Ladies of the Lock – The WI group for Camden, Kentish Town & Tufnell Park

This year, we’re taking over The Dome, Tufnell Park and Boston Music Room. Using these two amazing, world-class neighbouring venues we can keep the music constant throughout the day, and make our Fest bigger and better than ever!

* Stalls with zines and goodies.

* The best damn day/night out of the year.

Applications from stallholders and zine sellers, other kinds of performers that we haven’t even thought of yet, and any other enquiries to loudwomenclub@gmail.com 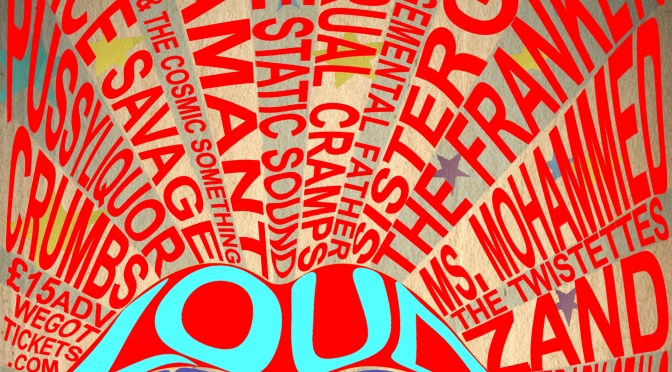 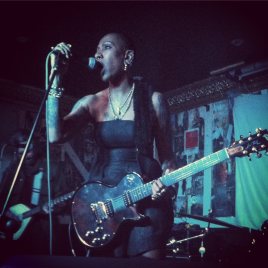 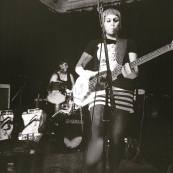 Jemma Freeman & the Cosmic Something 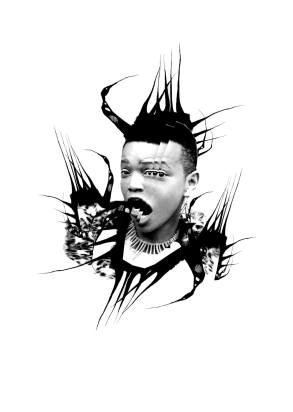 Here’s the news we’ve been dying to tell you … we can finally announce the first of the acts confirmed to play this year’s LOUD WOMEN Fest on 15 Sept at The Dome and Boston Music Room. Drumroll please!

The Menstrual Cramps
The band that made Oi cry! Winners of the 2017 LOUD WOMEN Hercury Prize.

WOLF GIRL
Noisy pop four-piece based in South London who write about sexuality, gender and anxiety.

The Baby Seals
Our favourite empowerpop trio from Cambridge.

PLUS DJs including MAMMORY TAPES and more bands TBA!

Keep an eye on your inbox for a full ezine coming soon, with news of a whole heap of new regular gigs at the Hope & Anchor. In the meantime, if you want to get in touch drop us a line on loudwomenclub@gmail.com, like our FB page or join our FB group.

"I truly believe Lime are on course to be THE breakout act for 2020." Lime’s newie 'Surf n Turf' is out today and it's our Single of the Week - Tony Rounce reviews
Our Friday soundtrack is one for anyone who left their heart in a John Hughes movie. NYC's Forever Honey offer us 'Christian' – which channels "the clever, no-nonsense spirit of 90's brit pop and the jangly guitars of 80's new wave". Happy Friday!
Video of the day comes from California’s Wargirl – Dancing Gold. BELTER.
Today’s track of the day is the eerie indie-rock of Seattle’s MARBLE with ‘i become a ghost’.
I am HER knocking of socks and shoes off here. Voice!
I, Doris + T-Bitch = T-Doris ❤️
My Tweets