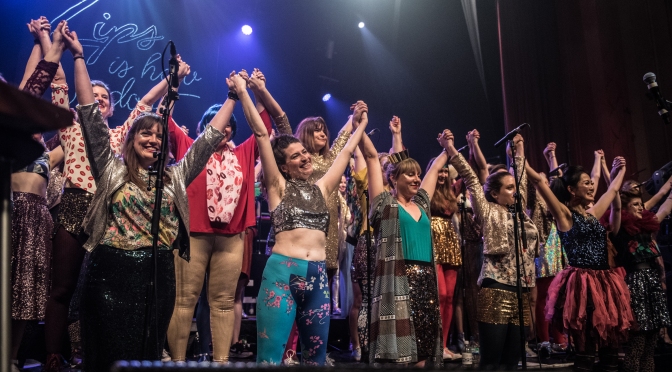 I had my first baby last December and by April, after three months of subjugating even my most basic human needs to those of another person, was desperate for just a couple of hours to feel myself. I found that time in the company of my beloved choir, Lips. When I arrived back at my first rehearsal post-partum, to hugs, congratulations and the familiarity of warm-up games and three-part harmony, I almost cried with relief. For two whole hours, all I had to do was concentrate on my own breathing, the lyrics we were learning and synching my voice with those around me. I wasn’t beholden to anyone else but I was in-tune with 60-odd other women. It was meditative in its power.

I think everyone should join a choir. Singing is well-known as a natural stress reliever and can help reduce blood pressure. It can even out your breathing, giving you tools to fight anxiety and asthma attacks. It boots your concentration and memory. When you sing with others, your heartbeats even synchronise* – it’s the ultimate community. But to me Lips is more than just a nice place to go and have a warble. It’s a group of women the likes of which I’ve never been part of before – free of the competition and resentment that can happen in the workplace, and lacking the nerve-wracking intensity of a close group of friends. It’s a large group of women ranging from their 20s to their 60s, from all walks of life (we’re non-auditioning, trans- and nb-inclusive and our members include surgeons, artists, students, teachers…) with one simple goal – to sing together.

It’s been a hugely life-enriching experience for me. It’s made me think about and question my feminism, my decisions and my place as a woman in society, and how I use that. It’s so much more than ‘just a choir’. We call the connections and community we’ve built the ‘Lipsweb’. This give and take includes anything from legal advice and solidarity following sexual attack to cake making and mum-to-mum advice. Our alumni still post on our private Facebook group from places as disparate as Beirut and Paris – there’s even a Lips New Zealand, set up by a former Lipster. We go on holiday together, we live together, some of us have married each other, some of us are genetic sisters – all of us are metaphorical ones.

This experience isn’t just unique to my choir. Loud Women’s very own founder, Cassie Fox says, “After the birth of my second child, I suffered acute post-natal depression. Finding myself at home with no close friends, no support from family, and no one I could talk to, I was really struggling with a colicky baby and an autistic toddler. I felt like I’d fallen into a well and didn’t have the strength to pull myself out. Joining a choir (South London Choir) gave me a few hours a week ‘release’ and really helped me feel connected to a community. My spirits were instantly lifted – my husband said the change in me was visible when I got home from choir, I had things to talk about, my eyes were brighter and I had a spring in my step he’d not seen for a while. From that choir, the off-shoot was the Liberty Choir project, which goes into prisons and hospitals, to form choirs with vulnerable people. I started going to Wandsworth Prison with Liberty choir, and now I go to Down View women’s prison each week. The choir has a big impact on the prisoners, who are otherwise often locked up for hours/days on end. In the choir setting they get to spend time not being judged by their past, and not worrying about watching their back – they are just humans singing with other humans. It’s a really levelling experience, and I and the other volunteers going into the prison get as much out of it as the prison residents do, I’m sure. As women, especially, literally making your voice louder is so empowering. My confidence has grown immeasurably since I’ve been singing – I’ve since formed bands, and started the music collective Loud Women. I couldn’t imagine doing any of that before I joined the choir – it’s no exaggeration to say that it completely changed my life, very much for the better.”

It doesn’t have to be an all-female choir, though. Singing itself is a bonding activity but if your choir centres on a shared experience, that can be instantly binding too. Alice Kershaw is a registered dietitian who sings with Trust Harmonix, the recently formed Guys & St Thomas’ hospital community choir led by vocal coach Mike King. She says: “After a busy and emotionally draining day at the hospital, I find it boosts my mood and relieves stress. It’s so nice coming together and singing with other hospital staff from every area – you meet people you might not otherwise. We have consultants and we have administrators – it democratizes the hospital hierarchy. We’ve done two official performances in the hospital but we practice on Monday evenings and sometimes the patients come and watch us, too.”

So you should find a choir, any choir, that suits you, whether you think you have a good voice or a crappy one. You almost certainly don’t, but anyway, who cares? When you’re singing with a group of people your voices will blend and sound amazing anyway. And as for my specifically female, politically active choir, there’s an inherent sisterhood to be found within its safe space. We fundraise for WAST (Women Asylum Seekers Together), a grassroots group which supports women seeking asylum in the UK with advice and English lessons. We’ve joined them on protest marches at Yarl’s Wood detention centre, singing so loud together that the women incarcerated in the centre could hear us even beyond the fences. We’ve sung at the women’s march and the anti-Trump demo. The solidarity found among Lips’ members makes us stronger, and that means we feel more able to spread messages of support to other women outside of our rehearsals and performances. Singing as a choir means you’re literally raising up your voice with those around you. It can be a form of protest as much as a balm for the soul. It’s so much more than just a two-hour warble on a Thursday.

Lips are performing a show themed around dance music and the diverse voices that brought it to the mainstream. Club Classics: The Lips Remix is on 14 & 15 November at Clapham Grand – tickets are £15 (£8 for concessions), available at buytickets.at/lipschoir. Lips will also be raising money and awareness for WAST at these gigs.

Get your tickets quick for our first ever all-dayer – LOUD WOMEN FEST! Tickets selling fast.

The best in woman-led pop/rock bands, plus solo acts, poetry, and a few more surprises.

Children welcome all day (although after 7pm things get a louder and little ears might not like it!). The venue is wheelchair accessible. The venue’s toilets will be de-gendered for this event.

““If, say, Kathleen Hanna flew in to Gatwick tomorrow, grabbed you by the collar and asked “What’s going on here then? Where do I need go? What do I need to see?” – God is in the TV