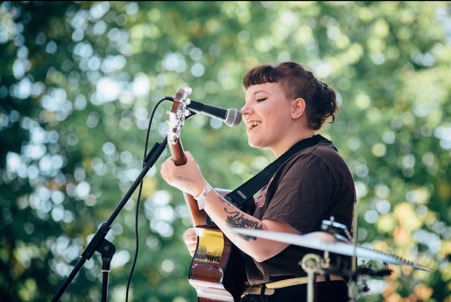 2. If you could add one member to your band – any person, living or dead, musical or otherwise – who would it be, and what would they play?
Nai Palm from Hiatus Kaiyote. She is so talented, I love her style of music and writing and would love to work with her.

3. What was the last song you wrote, where were you when you came up with the idea, what inspired it, and how did it turn out?
The last new song of mine doesn’t have a title. I was playing at an open-mic night in SE London and I do improvisations in my set. The inspiration was literally the audience: I ask them to shout out random words (objects, emotions, whatever is on their mind at that point in time). I think people loved it! I think the audience love to be included in the making of something, which is what I find really special.

4. Which was your favourite gig you’ve a) played and b) watched?
My favourite gig I’ve played is probably the International Animal Rights Conference in Luxembourg 2017. My favourite gig that I’ve watched would be Petrol Girls at Loud Women fest, I was going through something personal and their songs resonated with me so much it brought me to tears!

5. Recommend a record and a book that you think our readers might not have heard of.
Steve Lacy – Dark Red. I recommend this record (and music video) because it was all made on garage band on an iPhone using an iRig to record the guitar. Its genius and just shows that you don’t have to have the fancy equipment to make amazing music. The music video was all filmed on an iPhone as well. Pure and raw talent, I love that.

Jeff Garvin – Symptoms of Being Human. This book is the first time I was able to connect to any character fully. The protagonist is a gender-fluid person and really helped me normalise my gender, show me that it’s okay to identify as non-binary and that there are other people out there like me. Representation is so important, this is also what fuels me on with my music.

6. What’s your best piece of advice for young musicians?
Do it. Don’t listen to the adults telling you to be ‘realistic’. Take risks. And most importantly: tell those creepy men to fuck off if they tell you they can get you gigs in return for a sexual favour. You deserve way more than them.

Update Your Brain – The Tuts

8. What are your musical goals?
To always keep exploring with genres, I’m the kind of person that can’t stick to one thing – and I often question whether or not that’s positive or negative I’ve decided to not think of things that way anymore. I wouldn’t like to get to a point with writing music where it feels like a chore, so keep on exploring sounds would be my first goal.

Another goal is to play. To play as much as possible, get more people listening to my music. I’m still quite new but I know what I need to do.

Also get merch and proper branding. I’m D.I.Y, so I’m learning a lot on the way, but I’m enjoying it!

9. Give your top 5 contemporary bands/musicians.