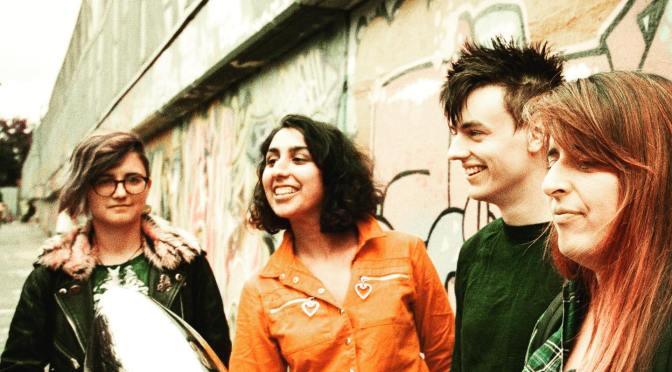 After forming at this year’s First Timers Fest – a tried-and-true training ground for DIY acts – indie-punk gang Breakup Haircut have been gathering the attention of their underground scene. Since then their hard work hasn’t stopped, with a regular run of gigs this Autumn giving them an intrigued audience just in time for their debut EP. The charming ‘What Did You Expect? I Got It Off The Internet!’ channels the subversive peppiness of early riot grrrl to bring humanity to the insecurities and worries of today’s creators.

These ideas are all found in the EP’s opening track ‘I (don’t) Wanna Do Things’. While the simple yet catchy line of the rumbling bass promises positivity, the lyrics are actually an incisive example of the group’s confessional style when it comes to songwriting. The chorus flits back and forth between motivation and defeat, as the title suggests with its uncertain parentheses. Meanwhile the verses alternate between quippy references to shows like The Office, and raw truths on the struggle to find one’s identity while feeling like a cog in the modern machine.

The confessional style of ‘What Did You Expect?…’ is unfailingly endearing. Tracks like ‘Kim Pine’, with its grunge-style heavily pedalled guitar riffs and haunting background vocals, twist earnest tracks out of the macho posturing often associated with rock and roll. There’s something very stripped down and raw about Breakup Haircut’s sound that really matches this energy, bringing out the emotions of the lyrics with painful accuracy. However, the cutesy pop culture references in the lyrics of ‘Mystery Inc’ also provide plenty of evidence for these guys knowing when to let loose and enjoy themselves.

‘Mum, I Wanna Be A Greaser’ closes the EP with an appropriately fifties-inspired guitar line and catchy chorus. There’s also the usual sprinkling of their punk energy, with both the up-tempo sound and the subversive look at topics like gender presentation reminiscent of acts like Bratmobile. As with the track before it, ‘Mystery Inc’, this song makes it clear how much love there is for the long-established culture of DIY, whether they’re breaking the rules or playing with them in their own charming way.

Find Breakup Haircut on Facebook and Bandcamp, and catch them live on Wednesday at the Fiddler’s Elbow, along with the superlovely Girls Like Us.

"People listening to the songs are welcome to interpret them however they want as long as they’re not Tories, terfs or dicks – in which case they can fuck off." Album review and interview with @slumoflegs by Kris Smith.
‪And yet more good news - Hanni from @arxxband is playing our ‘stage’ on the 11 April Balcony Fest in aid of @nhscharitiestogether
We are delighted to bring you today the exclusive premiere of @nazandella 's new single, 'Freedom', a day ahead of its release.
This Friday we're hosting another LOUD WOMEN online – with Hannah Rose Kessler and Ode to Sleep Broadcasting from facebook.com/loudwomen from 8pm - Join us!
The Balcony Festival is online now! 14:45 @miriofficialuk MIRI - Loud Women Stage 15:15 Beija Flo - Sonic Tonic Stage 15:45 Happy Science - Gigslutz Stage 16:10 Martha Makes Mistakes - Quarantini Stage 16:40 The Burning Hell - Joyzine Stage
Stonked to bring you the exclusive premiere today of a new video from Glasgow’s Run Into the Night – ‘Blow a Kiss / Catch a Knife’ – lo-fi disco-rock on the timeless theme of creepy exes slithering back into your life. Hiss, boo to them.
My Tweets