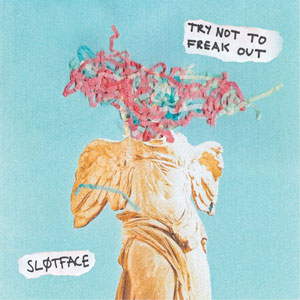 Review by Stacy Norman
Sløtface: ‘Try Not to Freak Out’ (LP)
Out now on CD/Vinyl/DL
It’s always exciting when I get to review a band I’ve never listened to before. I mean, yeah, sometimes it’s massively disappointing, but sometimes it’s exciting and you can feel yourself fill up with joy at discovering a new, awesome band.

Norway’s Sløtface fell into that latter catergory, and I’ve been floating on that “new band feeling” all week. Haley Shea’s vocals remind me of Eva Hendricks (Charly Bliss) and Kay Hanley (Letters To Cleo); deceptively pop friendly, while being perfectly capable of delivering biting words when necessary.

Formed in 2012, ‘Try Not To Freak Out’ is the bands first full-length release. Sound-wise, there are definite nods to 90’s alt rock (a lot of these songs would have fit in perfectly on the Ten Things I Hate About You soundtrack!), though they’re delivered through a current 10’s soundscape, cleverly avoiding the trap of sounding like just a revival band.

Things open with a bang, with the Patti-Smith-referencing ‘Magazine’, which sees the band tackling the age-old problem of beauty standards in the media, and still managing to make it sound fresh and relevant. It has everything I love in a song; fuzzy guitars, “oohs”, sweet-yet-sneering vocals, and a big singalong chorus. It’s a powerful mission statement, and a perfect opener for this album.

‘Nancy Drew’ provides a timely anthem, as Haley warns us to “watch out, she’s a nightmare Nancy Drew” as our protagonist eyes up the possibility of “taking your welfare boys club down.” I’m willing to be a lot of us can relate as she laments:

“10,000 hours of falling asleep to singer-songwriter tunes in my ear /

And I think I’ve filled my quota of boys with acoustic guitars.”

‘Try Not To Freak Out’ delivers catchy, feminist tunes with a glittery pop sheen, which is just what we need in a year as darkly and overtly misogynist as 2017. It’s jittery and joyful, and will have you hitting “play” again after every listen through.
Sløtface’s website

"I truly believe Lime are on course to be THE breakout act for 2020." Lime’s newie 'Surf n Turf' is out today and it's our Single of the Week - Tony Rounce reviews
Our Friday soundtrack is one for anyone who left their heart in a John Hughes movie. NYC's Forever Honey offer us 'Christian' – which channels "the clever, no-nonsense spirit of 90's brit pop and the jangly guitars of 80's new wave". Happy Friday!
Video of the day comes from California’s Wargirl – Dancing Gold. BELTER.
Today’s track of the day is the eerie indie-rock of Seattle’s MARBLE with ‘i become a ghost’.
I am HER knocking of socks and shoes off here. Voice!
I, Doris + T-Bitch = T-Doris ❤️
My Tweets