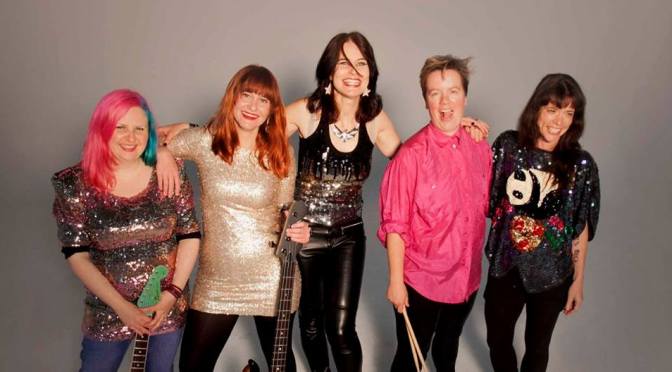 Girls Rock London (GRL) run music camps for women and girls in London. They are all about amplifying girls’ voices and being unapologetically LOUD.

GRL camps encourage women and girls to play, write and perform music, whether or not they have ever done anything musical before. They provide a safe, creative space that builds confidence and self-expression and feeds into the growing community of supportive rad women making music in London.

in May at the Blue Studios in Dalston. 20 women learnt the basics of an instrument, formed bands, wrote a song and performed them at a live gig in just three days. Most of these women hadn’t met before arriving at the camp on Friday night, and many had never even picked up a musical instrument before! Bands and artists like The Tuts, Kate Nash and Liv Wynter came down to the camp to perform and take part in workshops. It was a massively intense, creative and inspiring weekend which ended with a gig at The Victoria in Dalston, where over a hundred people came to watch the four brand-new bands perform their new material.

GRL is one of hundreds of Girls Rock Camps that take place every year all over the world. The idea emerged from the riot grrrl movement in the north-west of the US in 2001, as a response to sexism in the punk scene, and very quickly spread all over the US, Canada and Europe, with camps now taking place all over the world in places like Australia, Brazil and Saudi Arabia. It’s a truly global DIY movement; anyone can take the basic model, set up a camp where they live and run it the way that they think will work best in their city. Older camps help new ones to get set up: GRL had advice and help from projects in Boston, Philadelphia, Finland and Sweden.

The team of volunteers will be running their

first girls’ camp for 11-16-year-olds in August. The organisers say, “We CAN’T WAIT. Watching 20 teenage girls rocking out in their brand-new bands at the final gig is going to be the highlight of our year. We always want to hear from people who are interested in getting involved as volunteers, instrument tutors, bands performing to the girls and young women at camp, or just coming along to our fundraisers. So get in touch if you like the sound of what we do – we would love to hear from you.”

Some brilliant news: #LOUDWOMENFest5 is happening 20 March 2021 at 229 in Central London – if you’re in an awesome womxn-powered band you have until 15 May to apply!
Today’s track of the day is the gorgeous ‘Landon’ by @gracepettis
"People listening to the songs are welcome to interpret them however they want as long as they’re not Tories, terfs or dicks – in which case they can fuck off." Album review and interview with @slumoflegs by Kris Smith.
‪And yet more good news - Hanni from @arxxband is playing our ‘stage’ on the 11 April Balcony Fest in aid of @nhscharitiestogether
We are delighted to bring you today the exclusive premiere of @nazandella 's new single, 'Freedom', a day ahead of its release.
This Friday we're hosting another LOUD WOMEN online – with Hannah Rose Kessler and Ode to Sleep Broadcasting from facebook.com/loudwomen from 8pm - Join us!
My Tweets