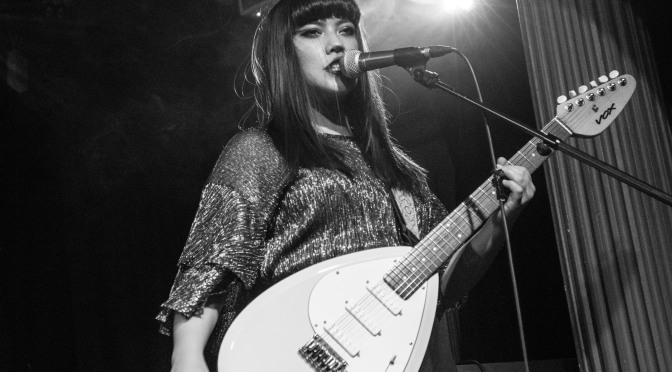 Interview by Tony Rounce, photos by Keira-Anee and  Neil Anderson

It may have been all quiet on the DOLLS front of late, but Jade Ellins has not been resting on her laurels.  Currently in two active bands, the duo’s charming, affable front woman took time out from her ever-busy schedule to tell our Tony all about herself, and to bring LW up to date with what she’s been up to recently…

I suppose the first question that everyone would like an answer to (myself included!) is what’s become of DOLLS?

Well it’s been a bit of a rollercoaster as Bel had to go back to Spain last year. However, we will be releasing our 2nd EP this year, hopefully in the spring. We recorded it with Margo Broom producing, and it’ll be coming out with the same team who released Pop The Bubble – I can’t wait! I’ve been writing too, and working really hard on new songs that I think are really strong and I’m so excited for people to hear them!

You’re still in two top notch bands that we know about, in Abjects and Big Sea Creature. Obviously BSC is an outgrowth of the late, lamented Long Teeth, but how did the hook up with Abjects come about?

I got a message from Kelly Chard of We Can Do It, saying that Abjects were looking for a bassist and would I be up for a jam – so I said yes! Then Noemi (Abjects) got in touch, we had a jam and that was it! I enjoy playing with the girls so much, and think their songs are fantastic!

How does being a part of a bigger band (as you are with BSC and Abjects) differ from being its lone frontsperson for you?

I generally feel a lot more relaxed at gigs if I’m not fronting, and I love supporting front people and getting to watch them on stage. I feel like when you front a band you give all your energy to the audience and it feels very personal, almost like a form of therapy. There is nothing quite like that feeling. With fronting though you feel the highs and lows of performing a lot more. I love doing a mix of both, as they are very different experiences.

What and who inspired you to aspire to a career as a musician originally?  Were your family musical/supportive/influential, for example? Did you see someone on TV and think ‘I Want To Be Them?’

Both my parents are musicians, so I was always encouraged to be musical from a young age. I started piano when I was 4 and could also hold a tune, so luckily I got my parents musical genes. I feel so fortunate that I get to earn a living out of music, as well as be creative and write my own music. Thanks Mum and Dad for pushing me to practice when really I just wanted to play Barbies all day!

Your favourite and most influential singles/albums are?

And your favourite five most influential artists?

First record you bought? And the most recent one?

First record I think was ABBA Gold and honestly I mainly listen to music on Spotify now. My partner Sam loves listening to records so I listen with him, lately we have been listening to ‘Be the cowboy’ by Mitski which I have been loving!

First band you saw? And your most recent one (that you’re not a member of, obviously…)

My first band was Bjorn Again, I loved ABBA when I was 6 (and still do!) and recently I saw Mango at their single launch, which was ace!

And your most memorable gig to date with any band you’ve been a member of?

Long Teeth’s final gig was a really wonderful evening for us, I honestly felt like I had to prepare emotionally for that gig for about two months. When I was there I was like right let’s do this! It brought me such happiness to be able to play those songs for people again and to remember our lovely Al. I also loved the DOLLS EP launch at Rough Trade. It was a Monday night at 6pm, and I thought ‘Oh it will be a small crowd’. I could’ve cried when I came on stage and saw it so full! (TR – having been present at the show I can happily confirm this to be true…)

You play guitar with DOLLS and bass in every other band I’ve seen you with. Which is your preference, and which came most naturally to you in the first place?

I started guitar lessons when I was five so I have been playing guitar for a really long time now. I started on double bass (I know I’m 5 ft 2 and I only got to play a half-size) then naturally moved onto bass guitar. I guess guitar will always be my first calling, but I love the discipline of bass and crafting functional parts. I also seem to get asked to play bass in bands way more than I do guitar. Bassists always seem to be the ones that are in demand.

As a songwriter, what part of writing comes easiest to you, lyrics or melody?  And how much input do you have to the creative input of a band like BSC, where you are not the main or sole songwriter?

I find coming up with the guitar riffs/chords the easiest. I write lyrics with Sam, and he always helps me come up with melodies. With bands like BSC and Long Teeth, Sam writes the core of most songs and we add to it. Sometimes I might heavily influence a song with a bass line but I’m also happy to support Sam’s ideas.

You’ve already played for and with some notable names outside of what we think of as the DIY music scene. Is there anyone special on your wish list that you’d like to add to your CV?

I would like to support Nick Cave and the Pixies, please!

Has there ever been a time in your life when you have considered an alternate career path?

Yes! Being a musician is tough and not always the most stable of careers. But it’s the only thing I really love doing so I keep on going.

I watch a lot of films and TV, if I’m honest. Characters I see in shows inspire a lot of my songs. I also make an effort to be social, as I feel like when you are writing and working from home you can become bit of a hermit and slowly become more and more uninspired.

Do you think it’s getting any easier for women in music, now that there are more bands out there comprised predominantly and/or exclusively of women/womxn?  Both at the DIY level and in general?

I think at a DIY level definitely. There are so many female fronted nights in the UK, which I think is brilliant. I think at a professional/mainstream level it has definitely got better, but there is still some work to do. I can think of some incredible female singers, but when it comes to instrumentalists I can struggle. I find there are very few female guitarists I can show my young female students for inspiration. I’m hoping this will change soon.

Any closing advice for those who aspire to the life of a singer/writer/musician?

I think my main thing is don’t become too complacent. It’s very easy to get a tiny bit of success and think ‘woo I made it!’  and then become big headed and very quickly realise the success isn’t growing as quickly as you think. Being hard-working and polite is also so important!