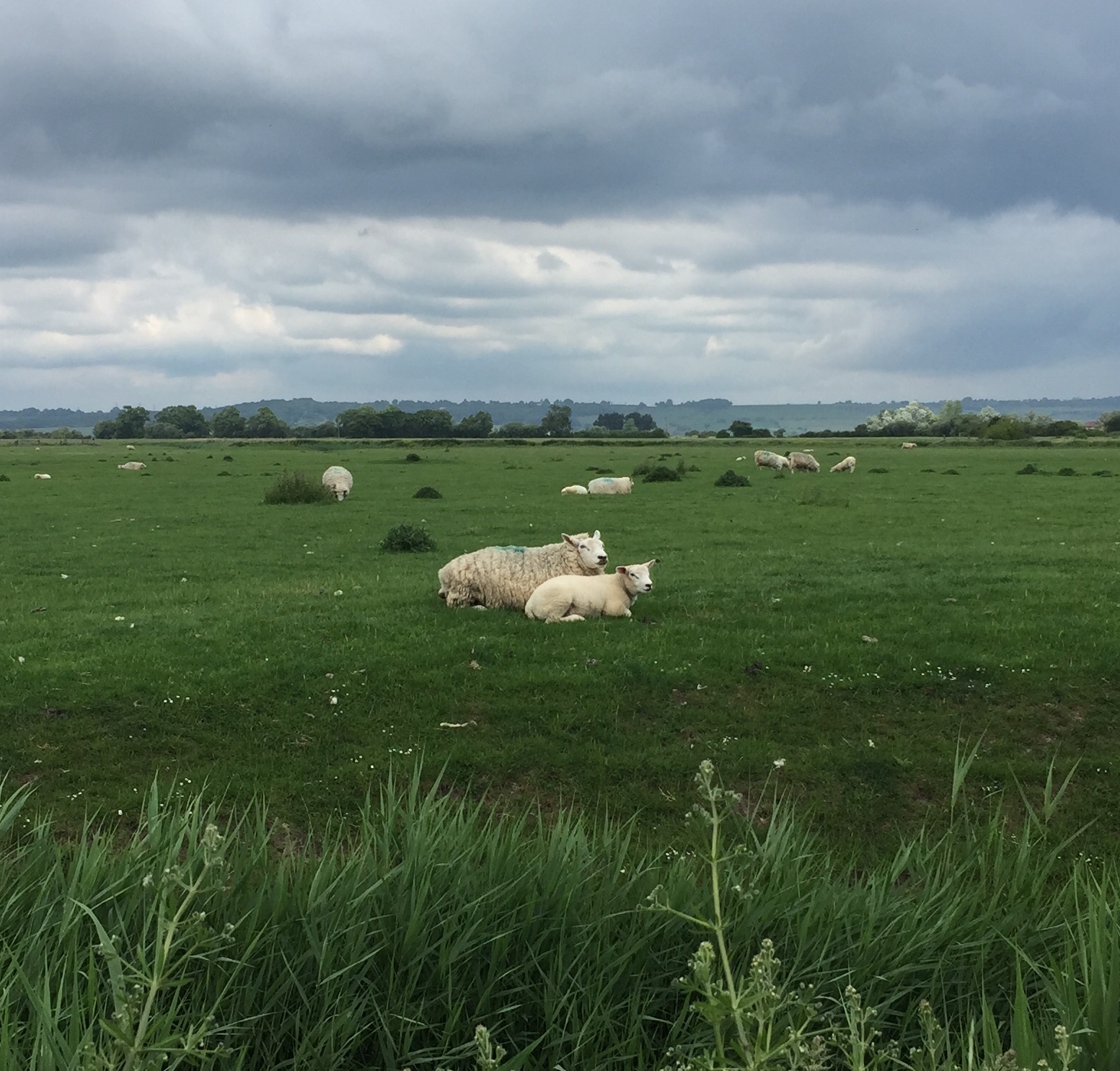 I’m listening to the Beatles in England right now and it feels almost religious.
This is Fruit & Flowers’ first UK tour, and o
ur first tour outside of the US/Canada. We’re done with the shows now, heading home tomorrow, and we’ve had some experiences that were really unforgettable.
And we saw a lot of sheep. 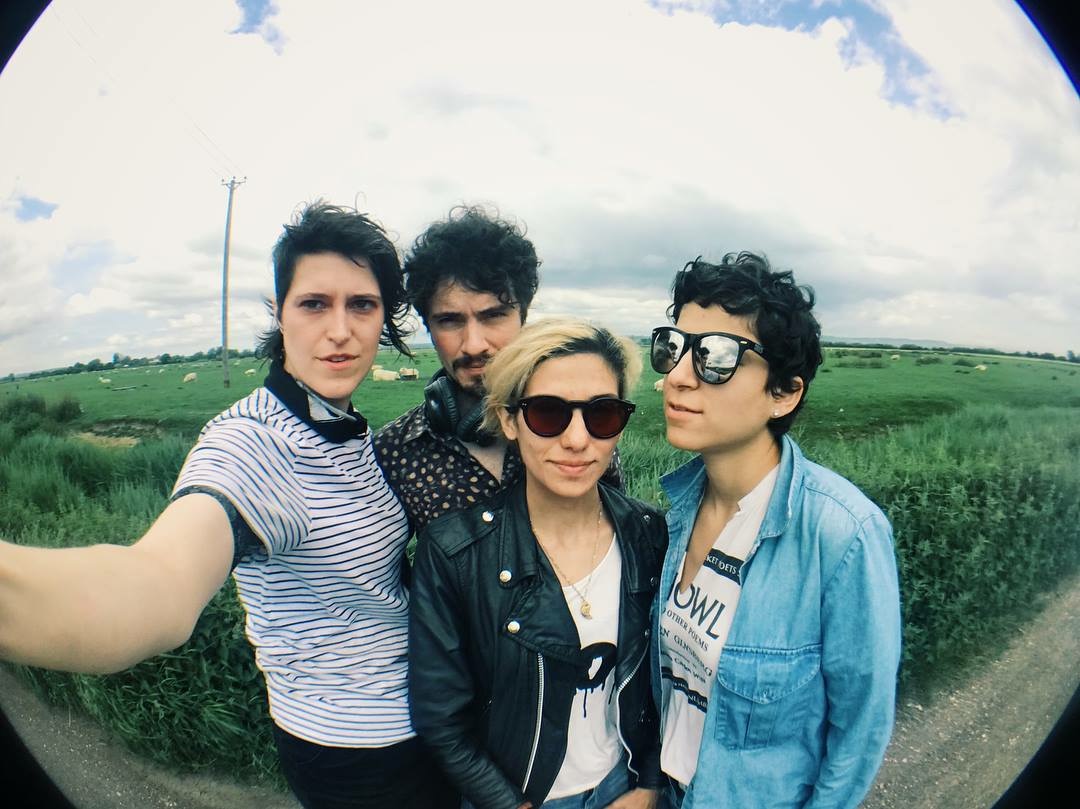 Personally, I’m very motivated to provide an empowering example for other women. I like being able to help non-male humans feel powerful and capable and celebrated. Some of my favorite moments of this tour stemmed from interactions with women we met along the way.

I’m wary of making too much of a “deal” of being a band fronted by women. I worry that it’ll take the focus away from the music too much. But as long as it still IS a “deal,” we as a community of music-listeners have work to do. I hope that focusing on the artistry isn’t mutually exclusive from noting the significance of simply existing and performing and making loud noise and taking up space as non-men. In this context, we double as musicians and activists of a sort. As does the band’s male member, our drummer, who has chosen to be an integral part of a band with a strong feminist ethic. There are plenty of avenues to activism; plenty of different ways to further social progress. Choosing music as our primary medium for expression and creation and change speaks to how centrally important music itself is to each of us. But I digress.

One of my favorite moments was watching the brand new band Lilac Noise, who we shared a bill with in Stoke-on-Trent. We met before the show – they had amazing charisma; incredible style, and as we watched them play we learned that they had immense talent and skill as well. They told us they’d gotten the band together because they didn’t know many other women musicians in Stoke, and so they gravitated towards each other and started a project. Their show with us was their first show EVER. As we hugged them through pre-show jitters and fed them cough drops, they told us that they’d looked us up when the show was booked and watched our Audiotree sessions “legit a hundred times.”

We were so touched to share their first show with them, and to have contributed to any kind of example of possibility. After the show we all went out dancing with them and Saint Ivy, who also played the show that night and absolutely slayed; they gave us lollipops, we were confused, thought they might be drugs, but they were really just lollipops. Seriously, Stoke is awesome.

We played two shows in a row on Saturday, May 26. First was the Rock and Bowl fest in Market Drayton in the afternoon and then Cafe Totem in Sheffield in the evening. The afternoon show was pretty epic– the biggest stage we’d ever played, the first time we’d ever been on a jumbotron. The evening show in Sheffield was a completely different vibe, one we’re much more used to; a cave-like downstairs venue, jumping around with a small but rowdy crowd. After the show, a couple of women came up to us to chat. They told me the result of the Ireland abortion referendum, which I hadn’t had a chance to check, and we cheered together. They said they’d come to the show because they knew the opening bands, and when they saw the last band was fronted by women they stayed to check it out. They said watching us play became part of the way they celebrated Ireland’s pro-choice, pro-women decision. It’s really moving to have been a part of their experience of a historic moment.

We saw tons of bands with women musicians on this tour that we truly loved; Sit Down from Brighton is a standout, really the entire Brighton lineup was killer. Lilac Noise from Stoke who we mentioned before, Par Scintilla from Leeds, Charli White in Manchester (the guitarist is incredible!), Vaudevue and Hot Raisin in Norwich, Lime in Guildford, Lazybones and PROM in London. We’re so thrilled to have played with so many fantastic bands.

At home in Brooklyn, there are tons of amazing musicians of all genders thriving in the music scene. When we leave the bubble of a big, diverse city, it hits me more often that what we’re doing can be really meaningful to other aspiring musicians, especially women and girls. One especially poignant moment was when three young women came up to us after our show in Northhampton. They said they’d never seen a rock band fronted by women before, and that seeing us made them want to start their own band. To that we all say, hell yes. HELL YES.

"I, Doris are not just ‘Mummycore’; they are hardcore revolutionaries, boosting our confidence, prepping us for everyday battle and getting us ready to run a better world in less than 2.5mins." 'Wonderwomen' by @idorisband - review by @iamher_london
Let's start the week with a banger. Bruise Cruise are a fresh young punk hope from Cornwall, and this first release is their themetune – all the best bands have a themetune! #trackoftheday
Balcony Fest starting NOW! loudwomen.org/2020/05/30/wat… 1 HIDEOUS WHEEL INVENTION @louderthanwarofficial 1.20 @firestationsband @sonictonicpromo 1.40 @helloscrounge @joyzineuk 2 @eilisfrawleydrums @loudwomen 2.20 @lejunkk @gigslutz 2.40 @clwb_fuzz @godisinthetvzine 3 @falseheads
Out today, @madamesomusic releases 'Generation Y'
Your Friday Soundtrack today is @tiffskiii 's 'Don't Wanna Talk', out today.
Out today on Beth Shalom records, @pets3matary release their label debut single, 'Get Away With It'. We caught up with frontwoman Gaby-Elise for a quick chat about the release.
My Tweets