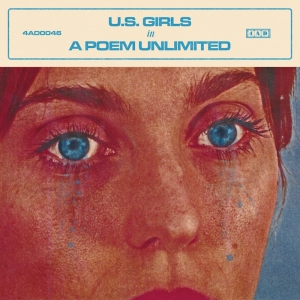 In my standard mindless streaming through Spotify, something in U.S. Girls’ single Velvet 4 Sale made me very quickly skip to the whole album, and then very quickly afterwards book a ticket for their next London gig in May.

In A Poem Unlimited is about the collective rage of women done wrong by centuries of patriarchy. With struggles like the #MeToo movement and more survivors of sexual violence and harassment coming forward, these voices are starting to be heard where the Trumps and Weinsteins of the world use to silence them. U.S. Girls presents an anthology of complex female narratives of women confronting power, but the tone is never passive, the stories never simple. Rage of Plastics is from the point of view of a woman made infertile from working at an oil refinery. On M.A.H. her rage is directed against former president Barak Obama for charming America while continuing to wage wars abroad. By telling this story in the formula of a bad break-up song, she echoes the feminist academic argument that the everyday violence and abuse women experience from men mirrors the violence and warfare throughout the world.

Fitting with these complex and often uncomfortable stories is her wonky art-pop style. Her collaboration with members of the Toronto funk and jazz collective The Cosmic Range gives the record an unmistakably funky undercurrent which finally gushes through in the final track in an 8-minute jam on the appropriately named Time. Killer guitar effects, weird synths, and a voice like a possessed Madonna: there’s plenty of stuff in there to leave you feeling just the wrong side of comfortable. There’s something a bit apocalyptic about it, like a high school disco in approximately 1982 being gate-crashed by the Rocky Horror Show. It reminds me of one of my favourite albums of the last few years – ANOHNI’s Hopelessness. Like Hopelessness, it is calling the world out for its shit in the most glorious-sounding way possible.