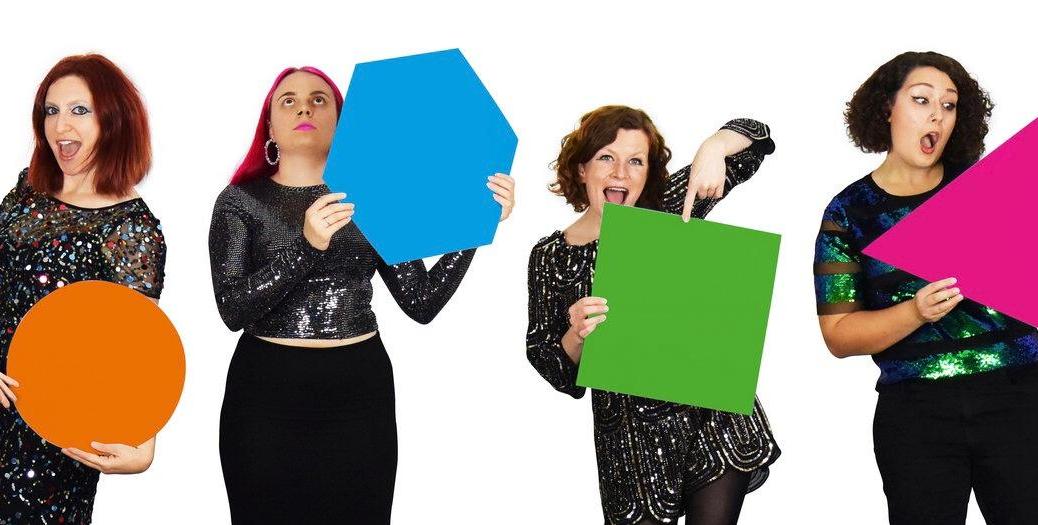 Lockdown has not been great on the whole, has it?  No gigs, no going out – and I would imagine for some (myself included), little to no impetus to create.

Not for everyone, however. Thankfully the show HAS gone on after a fashion, with many wonderful live living room, bedroom and balcony events, and an encouraging number of excellent new streamable efforts by old and new favourites.

My own virtual hat and, indeed, my own virtual whole head is off to any bands who have managed to release actual physical product in these extraordinary times. It’s been truly wonderful to have a lockdown ennui interrupted by the semi-regular arrival of flat brown mailers containing great albums and EPs by the likes of the Smalltown Tigers, Charmpit, DOLLS, Grace Savage – and the London quartet whose long playing debut is the subject of what you, and they, are about to find out is a decidedly enthusiastic review.

The four women of Bugeye started writing and recording ‘Ready Steady Bang’ about this time last year, and the involvement of the good people at Reckless Yes Records means that it’s now available for purchase as you read this. (It’s actually Bugeye’s second release of 2020, following the four-track ‘Is This Love’ EP that came out just as lockdown was becoming inevitable, and the band is to be commended for only repeating one track from that here).  The highly limited vinyl version sold out right away, but that shouldn’t stop you from investing in a compact disc that you’ll find yourself playing with a frequency that may border on obsessive.  Speaking for myself I’ve hardly taken this one off the turntable since it arrived – and when I have, it’s mostly been to turn it over.

Bugeye describe themselves as ‘a cross between Blondie and the Pixies’ and perhaps that ‘cross’ falls slightly closer to the former than the latter.  It’s the Blondie of the ‘Atomic’ era that ‘Ready Steady Bang’ aligns most directly with. You’ll make that connection as soon as you hear Kerrie Smith’s powerful, hi-hatted drums start slurping relentlessly through the first couple of tracks, anchored by Paula Snow’s burbling disco bass and topped by the Dr. Phibes-style synth keyboard work of Grace Healy. I hope singer/guitarist Angela Martin won’t be offended if I say that her animated, passionate squeal brings to mind dear Clare Grogan, as she sounded in the days after Altered Images decided that they might sell more records if they sounded more like the new Blondie than the old Banshees.  Collectively the quartet of Bugeyes make a lot of joyful, unashamedly 1980s-style noise, on a 2020 record that bodes extremely well for their future. The tracks you can hear right now on Bandcamp offer a good cross section of Bugeye’s overall oeuvre, and will give you a good idea of what to expect from those you can’t. ‘Blue Fire’ comes after an initial run of urgent sounding, fast-paced floor fillers and injects a modicum of punchy funk into the musical proceedings, while emphasising the pithy lyricism that prevails throughout.  ‘When The Lights Go Out’ brings us back to Bugeye’s own brand of provocative post-patriarchy disco, and is a good taster for the rest of side one.

The second side is marginally less fast paced overall, but once again crammed with good songs that are occasionally one hook short of anthemic here and there but not to be criticised for being so. Having said that, ‘Electric’ has a real SingaLongaStadium-style chorus, with a whole bunch of ‘hey’s to pump your virtual fist to. It’s not on Bandcamp but ‘Sunday Monday’ is another out and out winner, with lyrics that won’t fail to resonate with anyone who has ever had to commute for more than the occasional day. There isn’t space to rave about everything here, but trust me when I tell you there’s not one track that’s going to make you reach for the fast forward button. Being on the short side, the album never wears out its welcome and gives you the impetus to sneak in a further cheeky listen of the whole thing when it’s done, rather than watching yet more of those endless re-runs of ‘Tenable’ and ‘Tipping Point’…

I hope we all get the chance to go out and see Bugeye perform their most excellent long-playing record soon. But until we can, this is the best sort of ‘make do’ anyone could wish for.

‘Ready Steady Bang’ is out now on Reckless Yes Records and also available on CD via Bandcamp.  No imminent gigs, obviously – but please do feel free to follow Bugeye on Facebook, Instagram and their website.