I, Doris are a “mummycore art-pop foursome”, comprising 3 of LOUD WOMEN’s key team members – Cassie Fox, Lucy Morgan, and Abby Werth – plus a rolling, Spinal Tap-esque conveyor belt of drummers that have included Crack Foxes‘ Louisa Edwards-Knight (the official drummy Doris) in London, the Mekons‘ Jon Langford in Leeds, Party Fear‘s Eilis Frawley in Brighton, and T-Bitch‘s Stevie Ramjet in Newport! On stage though, everyone’s “Doris”: as their themetune snipes at the anonymity befalling women under patriarchy, “girls are all the same, chicks are all the same, birds are all the same – Doris is our name”.  Their set is a mix of electro-punk witty-lyric bangers, and covers selected for their originally problematic sexual politics, rewritten with a feminist bent and heaps of humour. The band were described by one reviewer as “feminist in a relatable and light-hearted way”, but I, Doris is deadly serious – make no mistake, they’re laughing right at the patriarchy. I, Doris is pretty much the LOUD WOMEN house band now, so you can catch them at our Christmas party on Thursday 13 Dec at the Lexington with Young Romance and Sit Down, in Brooklyn NY’s The Well on 1 Feb for the launch of LOUD WOMEN NYC, and back in London on 9 Feb at the Hope & Anchor with Ill, Hysterical Injury and Gender Chores. In the meantime, get to know them a bit better with our 10 question interview …

1. If you could add one member to your band – any person, living or dead, musical or otherwise – who would it be, and what would they play?
Doris/Abby: Mavis Riley off of Corrie on theramin. I think she is a perfect Doris.

2. What was the last song you wrote, where were you when you came up with the idea, what inspired it, and how did it turn out?
Doris/Cassie: I’m writing a song at the moment called ‘I’m not your mum’! I was in the car when I came up with the idea – I do most of my songwriting while driving. I was thinking of exes, well one particular ex, who really wanted a mother rather than a partner. I had to remind him to brush his teeth, urg! The song is coming along nicely.

3. Which was your favourite gig you’ve a) played and b) watched?
Doris/Lucy: a) Leftfield Stage at Glastonbury with Thee Faction – total bucket list item
b) Pet Shop Boys at the third Bestival – they brought their full stage set and every single audience member was in fancy dress and dancing without a care in the world.

4. Recommend a record you think our readers might not have heard of.
Doris/Louisa: The Sound of Music sound track. After recovering from your initial disgust after hearing 16 Going On 17 basking in the fact we have come a long fucking way since then 😂 Also Coral Fang by The Distillers because Brody Dalle is not celebrated nearly enough.

5. What’s your best piece of advice for new guitarists?
Doris/Abby: Find a way of playing you like the sound of – for me out of taste and necessity it’s playing in a simple way – I think I’d practice loads more if I had time though – it’s good to sound sharp even if what you’re playing is pretty basic!

6. Which would you prefer to play: a small venue packed with friends, or a large venue packed with strangers?
Doris/Lucy: Tough one. I would be much more nervous playing in front of 10 people I know than 1000 I didn’t! But I love it when my friends turn up and I love it when I they are smiling/nodding along (we can see you from the stage, you know!) so I will go with the former, though with maybe a large glass of wine to steady the nerves first.

7. Your top 3 most beloved albums ever – go.
Doris/Abby: These change quite a lot – except for one… my favourite. These are all albums I’ve loved for years and never tire of though. So at the moment I’ll pick Arular by M.I.A, Dragnet by The Fall and my favourite album of all time is Cut by The Slits. It never fails to make me laugh and cheer, and it’s really catchy but also experimental.

8. Give your top 5 Dorisses.
Doris/Louisa: Obvs the 3 Dorises who stand in front of me on stage, the Mrs, and my little kick ass girl🙌 Also:
Brody Dalle
Kylie Minogue
Malala, the brave girl who got shot in the face for going to school and is now fighting the good fight.
Kristen Stewart for making Bella gay
Kate Winslet, before she defended Woody Allen 😳

9. What advice would you give to “grown-up women over the age of 35” who are considering forming a band?
Doris/Lucy: CRACK ON. Being in a band is amazing. You’ll pick up a whole new load of life skills without knowing it, it will help your confidence, you will meet a whole heap of new people, but mostly it will be a massive amount of fun. There are very few bands in this age category from what I can tell, and we definitely have a very different perspective on life but equally valuable. Go show the young ‘uns how it’s done!

10. What’s the most important thing we need to know about you/your band right now?
Doris/Cassie: I, Doris have a spangly single coming out very soon, along with a spangly video just as soon as we get around to filming it in my kitchen! Next year we’re hopefully going to play lots more gigs, record some more, travel the world, and overthrow the patriarchy! 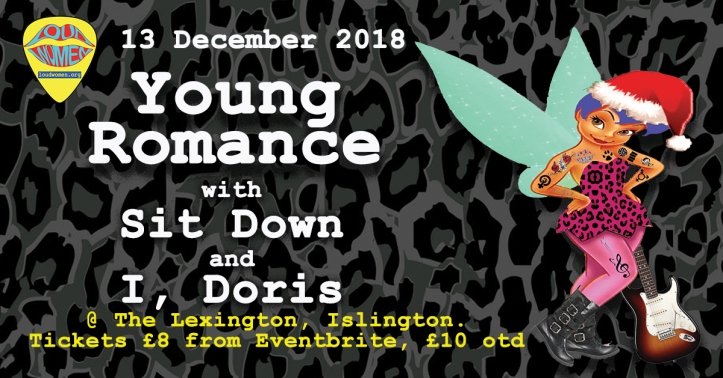