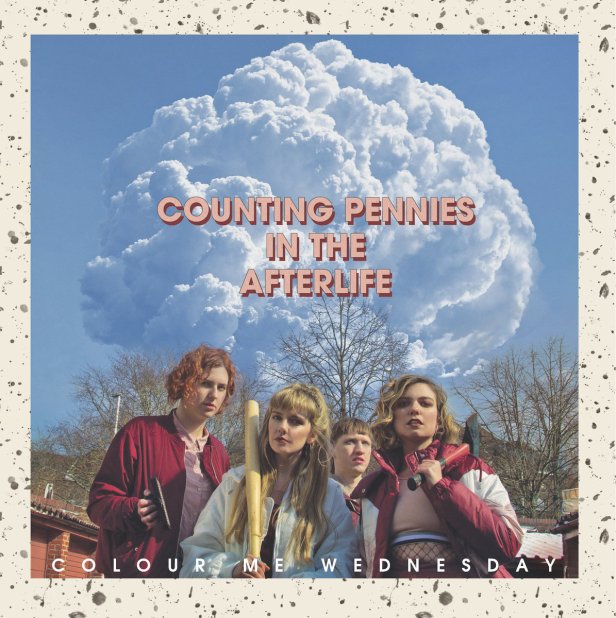 As the old expression has it, writing about music is like dancing around architecture while trying to herd cats into nailing jelly to a wall [check – Ed.] Reviews are tricky things and I’m increasingly aware of how easy it is to say more about yourself than the record you’re attempting to mansplain, I mean review.  Perhaps I should pen a precis of the essential information, so: “Colour Me Wednesday are a British DIY band, in the indiepop tradition; ‘Counting Pennies in the Afterlife’ is their second album and marks a musical evolution from its predecessor, 2013’s ‘I Thought It Was Morning’; this accomplished piece of contemporary female/gender non-conforming/queer art is available now from Dovetown Records” – but that safe stuff doesn’t really get to the heart of the matter.

There’s another well-worn cliche about the ‘difficult second album’. The notion is based on a group’s first long player being a summary and compilation of their writing so far, in the context of music industry pressure to provide a quick follow up, one that bands are often unprepared for; the difficult second album could be rushed, ill-conceived or stuffed with filler rejected from the first record. It could be testament to a number of factors that none of that applies here: that Colour Me Wednesday are in no rush, suffer no writers’ block, and feel no such pressure. The period between albums might have helped of course, but on the other hand none of the band are exactly slacking: they all earn various livings and busy themselves with sundry side projects. Still, ‘Counting Pennies in the Afterlife’ is a brand new set of 11 songs, all previously unreleased, mostly unknown to their live audience and showing a stylistic and thematic shift from previous records. In fact, in an era when many DIY bands are barely scraping by, this album is something of an artistic triumph.

If there are precedents for the precise Colour Me Wednesday formula I’ve yet to discover it. Their early scratchy-guitar home demo aesthetic helped link them with and to indiepop, but listening retrospectively to the likes of Tiger Trap, Black Tambourine, Talulah Gosh, Heavenly, etc.. well honestly it largely leaves me cold. Colour Me Wednesday are just a much better pop band than all that. They don’t play sloppy, don’t do the twee thing, and know how to put a tune together. ‘Indiepop’ is a broad church though, and there are/were (notably, British) bands such as the Popguns and the Sundays which brought a vastly superior skill for melody and songwriting to that scene, albeit in a slightly-formulaic/highly-polished manner. In contrast this is the first Colour Me Wednesday album that wasn’t basically recorded at home: until now they’ve been writing crossover pop tunes but playing and releasing them DIY punk style. And anyway, if the worst thing you could say about this music is that it evokes Harriet Wheeler fronting the Popguns on, say, Dolly Mixture‘s equipment, that would be just fine, because it’s not like everyone is mixing those ancient ingredients. But no: the secret to the rewarding variety in these grooves is in the fact that Colour Me Wednesday have always demonstrated an appreciation of more than one genre (pop, punk, electronica, reggae); it lifts their work above all these inevitable but frustrating comparisons.

Of course, the above ignores what the band itself has been telling us for years: that their original influence is the Boston indie rock of Tanya Donelly and Juliana Hatfield (more recent names that come up include Lemuria, and Sky Larkin). Perhaps it’s merely because that isn’t quite my heartland music that I hear other stuff going on but, for instance, there’s a lyric in ‘Exposure’:

I met a man like you before
He said he’d act on injustice
When the perfect moment arose
When the music swelled,

which has a pointed, searing, poetic (political) economy to it that reminds me more of McCarthy than any American groups. Similarly, ‘Boyfriend’s Car’ presents a post-apocalyptic scenario wrapped in beautiful, overlapping harmonies (complete with key-change crescendo), the car a metaphor for a system heading for breakdown, dark broodings on “unpaid labour, pain and obligation” sweetly sung:

which recalls the message in the Jam‘s ‘Trans Global Express’, just as previous Colour Me Wednesday songs have recollected that band’s mixture of everyday social observation and suburban ennui. I’ve been listening to the Wednesdays for a number of years now and haven’t chanced upon any of their contemporaries who combine consciousness and melody in precisely this way, and shot through with a deeply English melancholy. You can also hear that alloy of resignation, hope, and anger – the cycle of non-acceptance – in the music of the Housemartins, Television Personalities, McCarthy/Stereolab and Comet Gain and I write this in full knowledge that Colour Me Wednesday may not listen to or care about any of those, after all, mostly male-dominated bands. They nevertheless mine a shared cultural seam.

Counting Pennies in the Afterlife acronymizes as CPITAL; you can even see a PCF flag fluttering in the optimistic breeze of the ‘Sunriser’ video, the album’s first single; yet at first glance the politics here are less conspicuous than before. Perhaps one consequence of becoming known for a song like ‘Purge Your Inner Tory’ is that every subsequent release seems superficially less didactic, but in actuality there’s a consistency in the way the band weave themes of interpersonal struggle with wider criticism of institutional structures, here and previously; they were always more Fromm than Fanon, perhaps. If that kind of talk seems overblown, consider the evidence in everything from choice of song subject to band organisation.

It’s sometimes remarked that Colour Me Wednesday ought to be a ‘bigger’ band than they are, but in what sense, and to what end? This is a group that determines its own image and direction, produces its own videos and releases their own recordings. They’ve created/curated their own world; even the logo of their own Dovetown label evokes an idealised community, its larger buildings presented as sound-system speakers, but otherwise at peace. A band that tours multiple continents and has released records in (at last count) seven countries has clearly found their audience. In fact in many ways what Dovetown has done goes to the heart of what punk was supposed to be about: not just a local hub for like-minded bands but an alliance promoting a different set of values, something probably only the anarcho-punk labels (Crass, Bluurg, etc.) actually accomplished. If you literally D-I-Y then things can take time, especially without the support networks the post-punk bands enjoyed back in what was a very different era, industry-wise. That a band can function in this way at all today, and with such prolific efficiency, speaks volumes. To paraphrase Joe Strummer on the Clash: they may not have ‘made it’ commercially, but they’ve made it in the culture.

None of which would matter too much if the music was no good. But over the course of the five years since their first album, the Colour Me Wednesday sound has retained its charm while developing and broadening in scope, furthered here by a professional production (by Matthew Johnson of Leeds band Hookworms). Back when the group started, the seeming influence of Lily Allen‘s pop-reggae breakthrough, combined with an underground (female-fronted) reggae-rock revival (the Skints/Dirty Revolution) could be heard in the song structures and vocal style of Colour Me Wednesday’s early songs. The offbeat has gone now, but that phase leaves a trace in a mastery of drum and bass, syncopation and space. The outstanding all-round skill of new percussionist Jaca Freer takes things to next level. Jen Doveton‘s voice, meanwhile, gets stronger with every release, and it’s hard to depreciate the keening, folk-ish, almost Kate Rusby-esque qualities of her vocal tone (although if I was capsule-reviewing for a magazine I might be more tempted to write: “FFO: Katie Harkin, Rose Elinor Dougall, Imogen Heap“. The final element that this album brings into fresh focus is the guitar work of Harriet Doveton and Laura Ankles, interweaving the expected crunchy punk chords and adroit arpeggios but given extra exploratory space here for texture and contrast. I’ll cut this paragraph short before I start using words like “soundscape”, but just to note a couple of examples, ‘Tinfoil’ builds slowly to a feedbacked climax, while ‘Disown’ and ‘Sad Bride’, there’s no other way of putting it, rock out.

The band then throw a complete curve-ball with penultimate track ‘Take What You Want (And Then Leave)’, which for the most part drops the guitars completely, providing one of the album’s highlights in the form of an affecting foray into indie electronica that wouldn’t be out of place on an Au Revoir Simone record.

‘Heather’s Left For Dead’ shows the band’s grasp of dynamics at its fullest: one of the album’s most immediate songs is also the shortest; its first bridge cuts back to a second verse with the chorus held back until half way through the track, after which the instrumental segues into a breakdown and reprise gilded with layered vocal harmony; the song never returns to a full version of a chorus that many a band would be tempted to milk to death. Colour Me Wednesday make their point and move on; we’re kept wanting more. Hey, other groups! This is literally How It’s Done. Are you listening? Well, are you, punk?

In retrospect, while their brilliant debut album ‘I Thought It Was Morning’ contained numerous notable new songs, it was also in some ways a slightly mixed bag, including older material dating back to the group’s student era. ‘Counting Pennies in the Afterlife’ is in contrast a more consistent, maturer work, as well as both a more steeled and hopeful statement. ‘Sunriser’ is as such the perfect opener, waving goodbye to failed relationships and invoking a new start; other lyrics pick apart the problematic behaviours of multiple (male) antagonists and authority figures. The songs, the band and the sound hang together for the full Dovetons’ Half Hour and once more I’m only left wondering what a band with this much talent and creativity will do next.

3 thoughts on “Colour Me Wednesday: ‘Counting Pennies in the Afterlife’ – review”