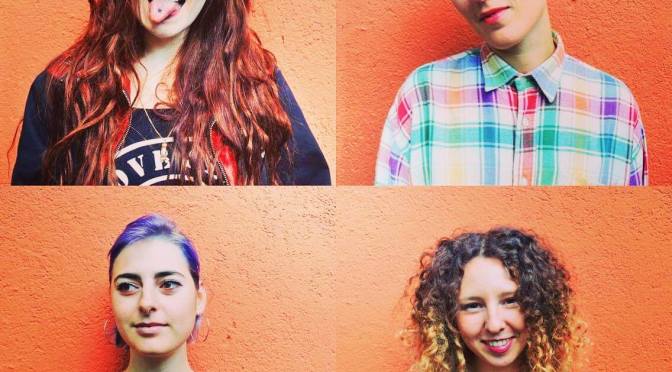 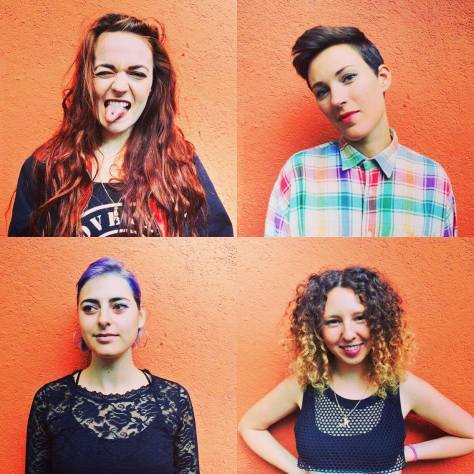 We at LOUD WOMEN make no secret of the fact that we do have favourites, of course, and Dream Nails are it. The band is Janey (top left, singer), Anya (top right, guitar), Lucy (bottom right, drums) and Mimi (bottom left, awesome new bassist). Hot on the heels of their autumn EP release, Dare to Care, the ‘Nails have only gone and recorded a double A-side single, Vagina Police / Fascism is Coming, out 7 Feb, with all proceeds going to Abortion Support Network. So chuffed that these busy punkstars still have time to come and play LOUD WOMEN nights – and the next ones’s just this Saturday, 20 Jan at The Amersham Arms, with Personal Best, The Ethical Debating Society and Best Praxis! Get to know ’em better with our 10 question interview.

Janey: Nobody! Our band is a perfect little family unit of 4 wives.

3. If your music could have a superpower, what would it be?

Mimi: I’m gonna have to go with create world peace.

Lucy: Make it be endlessly on repeat on full volume whenever it was played. I wanna drive the world into a beautiful madness.

4. What’s best: playing a big venue full of strangers, or a small pub full of friends?

Janey: I love playing big venues full of strangers actually – it’s always a challenge to try and win them over, and we manage to do it every single time! When we were on tour with Cherry Glazerr, we really had to stay on top of our game as every evening was a fresh crowd – it was so rewarding.

Mimi: By the end, everyone’s our friend!

Lucy: The strangers: love getting those early set toe-tappers crowdsurfing by the finale.

5. Recommend a record and a book that you think our readers might not have heard of.

Janey: Errrr I actually love this Captain Beefheart record ‘Blue Jeans & Moonbeams’. It’s his creamier, more accessible stuff but it’s still pretty weird. I love it. Ummm, a book… ‘Men in the Sun & Other Short Stories’ by Ghassan Kanafani is an amazing, beautiful insight into Palestine – the imagery in it has made impressions on me that have lasted for years.
Mimi: Bodyguard by the I.L.Y’s, formed by members of Death Grips.  My good friend introduced me to it almost a year ago and it’s one of those albums I end up listening to all of the time.  Also the book I’m reading now is The Inconvenient Indian by Thomas King, an important read if you are trying to find out more about the (erased) history of native people in North America.

Lucy: The Flamethrowers by Rachel Kushner. Contemporary feminist American fiction about a girl called Reno who moves to NYC in the 70s to study art and ends up breaking the ‘female’ land speed record. For a record, ‘Hip Harp’ by Dorothy Ashby, she made it in 1958 and is one of the most prolific jazz harpists and composers of the time, yet obviously she is not as entrenched in jazz history as her male contemporarites.

6. One for the guitarists … bore us with the details of your set-up please.
Mimi: I use an old Fender Musicmaster bass, and I’ll use any amp the kind people from venues or other bands will lend me for the night. I’ve just recently started using the Swollen Pickle fuzz pedal and it’s the biggest and best sound I’ve ever heard.

Anya: I play a 1980s Fender Strat that belonged to my mum, who played in feminist rock bands in the 70s and 80s! The guitar has seen a lot. Then for pedals I use BOSS chorus, BOSS delay, Box of Rock by ZVEX effects, some weird pedal I found in a warehouse called Metal Screamer by Ibanez. My most recent addition is a BOSS blues driver which I was given when I quit my dayjob!

7. What’s the best thing about being in your band?

Janey: The way we bring out the best in each other.
Mimi: All of the jokes and support.
Anya: Love, jokes and chips.
Lucy: Getting to exist in DreamWorld™.

8. What are your band goals?

Janey: We really want to make the punk scene (and wider music industry) a more thoughtful place that’s accessible to more people. We’re constantly speaking with promoters about ensuring there are women and people of colour on the line-ups we play, making sure the toilets in venues are gender-neutral and ensuring venues have a safe spaces policy. When we organise our own shows, we make sure they’re in accessible venues and we’re constantly striving to make sure we’re doing our best for our fans.

9. What’s the most important thing we need to know about your band right now?

Janey: We’re going to start inviting guests on our YouTube series Chip Advisor! By the way, Chip Advisor is us reviewing chips on tour.

Mimi: We are releasing a vinyl Vagina Police and zine Your Body is Not Your Own where all proceeds go to Abortion Support Network.

Lucy: …And we are going to win a VMA with the video for it.

10. Give your top 5 contemporary bands.

Janey: Screaming Toenail because they’re funky postcolonial punks and I learn something new at every gig…

Find Dream Nails on Facebook and Bandcamp … and come see them live on 20 Jan at the Amersham Arms!