Although we don’t believe in ‘good old days’ nostalgia, we make a slight exception for music journalism. In the late 70s and 80s post-punk period, large-circulation weeklies like NME and Melody Maker competed to interrogate musicians about what they were doing and why, about their songs and their thoughts on the state of society. At some point in the 90s, however, the music press became all copy and no content, and in the years since the media has tended to bemoan a lack of politics in contemporary pop, a situation which they helped to shape.

And yet, there is always political music being made by a minority, and increasingly it is being made, ill-reported and under-celebrated, by musicians from marginalised constituencies, who perhaps have more of a stake in making their voices heard. Every year we find more fiercely-politicised, intelligently committed, female* activists getting busy on the DIY punk scene, far from the plaudits and pitfalls of the spotlight. In this series of interviews, LOUD WOMEN meets them and asks some of the questions that the music industry won’t. 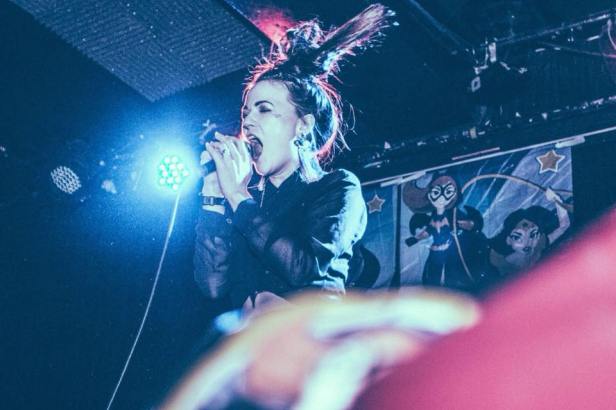 What made you decide to use your songwriting to express political viewpoints?
Politics is about delivering a message and building communities based on shared values. There’s no better medium for that than live music – and as a woman, it’s a radical act to express anger publicly and create a space for other women to do the same. I’m a feminist direct action activist and Dream Nails is an extension of that.

Do you use songs as tools to put across prefigured messages – or is it more that you self-express in general through music, with politics just one aspect of that?
It’s both. I’m an activist through and through, so the songs that I tend to write (though not exclusively) are political because that’s what’s on my mind; and that’s what’s important to say. After shows we get so many women and non-binary people thanking us for singing so openly, recently a woman told us that our gig was “like therapy”. Politics is often positioned as this serious and dry thing when in truth there’s nothing more passionate, and we have a lot of fun with it too. It’s not an abstract, academic thing or a topic to speak about – it’s in the way we host our shows.

Is the function of politics in music to affirm views within a reciprocal social group, or convert – or at least converse with – a wider public?
Those two things aren’t mutually exclusive, as you’re always playing to a different audience. It serves both purposes, but ultimately there are limits on how much you can express through the music alone – often I do a lot of talking onstage, and will share the national domestic violence helpline number too. That kind of stuff is always useful to say and share, because you never know who’s in the crowd and who might take something away.

Explicit or ideological politics is a rarity in music, even most punk/DIY scenes: is that something you’re conscious of, and does it matter?
It’s interesting you say that, because I agree. I expected there to be more activists within the punk/DIY scene. Music alone will not resolve the structural issues we face, but it can empower individuals with the strength they need to take concrete action, and by that I mean strategic and direct responses like campaigning, direct action and grafting at community building (which is different to socialising). It also comes down to how you live your politics and political identity; for me it’s a lifelong learning as opposed to a label I wear, and that learning can only be done through action, dialogue and often feeling uncomfortable. Like, it’s great to be in a punk band, but make sure you’re actively involved in migrant rights activism, campaigning against police violence and volunteering on your local rape crisis helpline.

Do you see yourself as part of, and drawing influence from, a tradition of politicised music/art?
I do things very instinctively and in honesty, what I do doesn’t come from identifying as a musician, more an activist with a microphone. I don’t really listen to music and think “I want to do that”. When I have something I want to say, I’ll write some lyrics and the band will discuss the idea, and the band then builds a song around it.

There are various ways that a performer’s politics might not communicate to an audience, but you also make a point of speaking between songs to reinforce the message. Did that come naturally, in terms of the confidence needed? Is it to break the ice, to break down barriers with a crowd, or to clarify  – or all of those?
I’ve always done it and never thought twice about it, mainly because punk venues have shitty sound and nobody can actually hear the lyrics I’m singing!

The success of someone like Billy Bragg (approachably media-friendly, active in mild, non-threatening campaigns) might suggest that in terms of politics-in-music the music can actually be of secondary importance: is that true?
Yeah definitely. It’s an important aspect of what I do, but writing a song isn’t going to change a law or stop a fascist party coming into power. However, saying that, the music I write and the politics I hold aren’t mild or designed for mass appeal: they’re unapologetically radical, intersectional, trans-inclusive and queer. I do think that writing this music has the power to give other people the confidence to do the same, and convince them that what they have to say is important and they have a right to be heard – that in itself should open up more public space for radical voices.

Is there a pressure that comes with being known as a political musician? And is there a balance to strike between work on the one hand, and fun and self-care on the other?
Dream Nails have so much fun whatever we do. Sometimes we’re angry, sometimes we’re laughing – it’s all a release. We have a really great time away on tour together, though touring is unimaginably exhausting.  However, it does feel like we fall in this weird middle area where you’re open to a lot of criticism – too political and radical for the mainstream crowd, but not articulate or nuanced enough for the activist crowd. There’s definitely a pressure to always say the right thing. It’s really hard to do that in the music alone, and even through the spaces we have between the music, but we’re always conscious, listening and trying. I do think we’re held to a higher standard than, for example, standard dry man bands – because we’re openly political, and because women are immediately open to more criticism anyway.

As with most traditions, what we think of as political or “protest” music has previously been white/male dominated. Have things changed?
We live under hetero-patriarchal white supremacy so yeah, everything is white male dominated. Well, except the global market in care work, or NHS nursing, or everyday emotional labour, but that’s a different conversation. The DIY scene is doing really great things to challenge the lack of female representation and to skill-up musicians, but I still see all-white line ups and I still see DIY promoters fucking over working class female musicians by not paying them enough, or not at all. The DIY scene is as much about the promoters and venues as it is the musicians – everyone has a part to play.

How do you view the contemporary music industry as a whole?
Exploitative. We get paid 5x more (I’m not even exaggerating) by DIY promoters than we do by big bookers, so we have to balance out the gigs that we do in order to make sure we can financially survive. Like so many other creative industries, if you have a financial safety net then you can take risks, swallow losses and afford to spend more time cultivating your artistic expression. To be honest, if it wasn’t for the DIY scene, we wouldn’t exist! What is exciting though is the fact that DIY is growing.

What are the primary political issues we face, in the UK and globally?
Instead of naming an issue or cause, I’d say that one of the primary issues we face is an inability to put our egos aside and listen to one another – and to view oppressions as intersecting and connected. That requires honesty, humility and discomfort and in order to feel those things in a constructive way and to nourish each other to build a better world together, we need to create a kinder and more patient, reflective politics. It goes back to what I said about politics being a lifelong learning, not a label – we’re all learning and growing, all the time, and in order to do that we need to also express forgiveness and gratitude.

"a beautiful sequence of electronic shimmers and swirls – a musical version of the titular phenomenon"
We couldn’t miss the chance to see Liverpool’s @themysterines in London at Highbury’s The Garage last night! Our supersnapper @keiraaneephotography went along to capture the vibe. In her words “What a great band!”
Out now from @carparkband : ‘Warm Beers’, an punky-pop ballad all touring musicians will hard relate to: warm beers, rude sound engineers and mystery bruises. Looking forward to hearing more from this trio.
LOUD WOMEN is delighted to bring you the premiere today of 'Fade Away', new single from Cuban-American-in Berlin @dyanvaldes. This delightfully ear-wormy retro-synth electropop ballad is one FFO Saint Etienne, and comes with an emotive video perfectly capturing the song's themes of anxiety and panic.
All women #DeserveToBeHeard – but many feel unable to speak up due to stigma and fear around disclosing poor mental health. This means the numbers are likely to be even higher than reported. I support @womensaid vital campaign on #DomesticAbuse and #MentalHealth. Will you too? http://eepurl.com/hHQ7of.
Amazing ending to a brilliant party - @lambrinigirlz brought the fizz ❤️🍾🎉