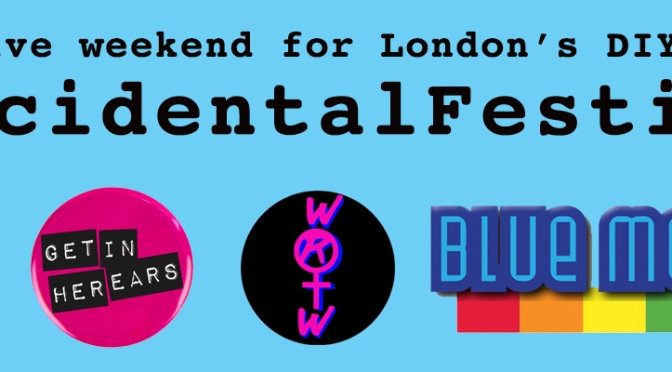 All those man-band promoters claim there’s not enough female musicians to play their festivals, yet we went and filled 4 days with awesome womxn-bands without even trying! #accidentalfestival starts today …

Friday 10 August:
Get in Her Ears at the Finsbury, with
*ARXX*
*Nervous Twitch*
*Scrounge*

Sunday 12 August:
Who Run the World celebrates their 3rd birthday at the Mill Hill Music Complex with a Sunday afternoon open mic jam – get involved!

Awesome events also happening this weekend in the DIY capital …

No excuse for staying home! 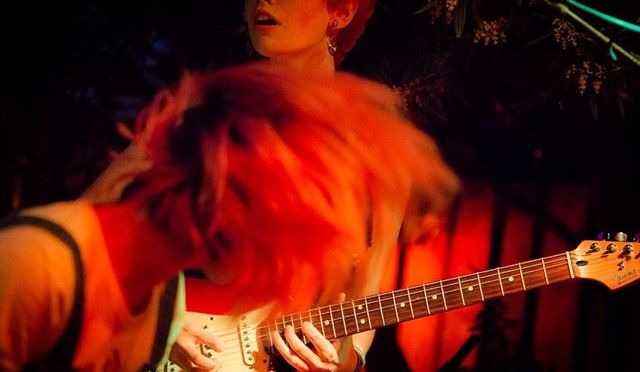 Wondering what to do in the big smoke this weekend? The musical madams at Loud Women and Who Run the World have got you sorted! 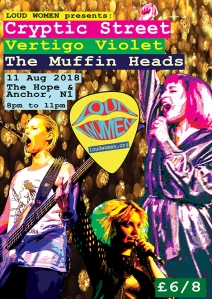 Loud Women present a night of awesome music, with performances from:
Cryptic Street (Malta)
Maltese 4-piece punx currently taking over the world – so excited to bring these awesome girls to London! They’ve just released their album ‘Titty Monster’ and it’s fawesome. Do not miss this.
Vertigo Violet
Birmingham’s finest garage punks, led by powerhouse Charly.
The Muffin Heads – https://www.facebook.com/themuffinheads/
Essex grunge trio
*PLUS*
As it’s an extra special night, we’ve got LOUD WOMEN DJs til midnight, so bring your dance pants and expect a lot of 80s bangers!
Doors 8pm, Tickets £6 in advance, £8 on the door. 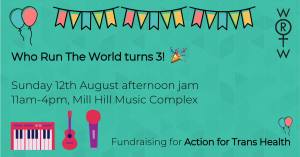 Our friends Who Run the World turns 3 this weekend, and they’re holding a Sunday afternoon jam (11am to 4pm) to celebrate!

The jam is for women, trans, non-binary and queer folk, though all are welcome to attend so long as your attendance is respectful.

Contributions can be made at https://www.paypal.me/wrtwuk which will be split 20:80 for studio hire and a donation to Action for Trans Health.

Bring your own gear, or borrow what’s there. Come to jam and hang, to meet some new people and just have a musical chill in Mill Hill. 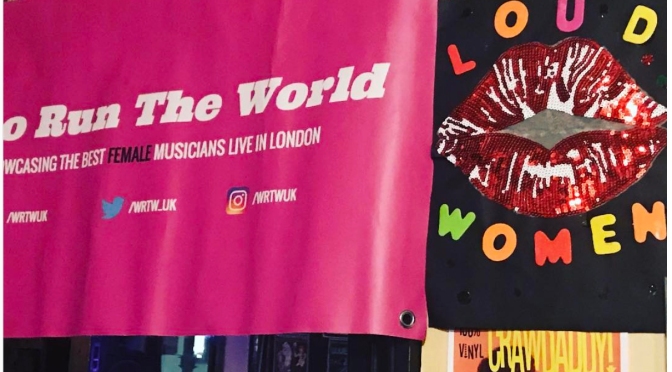 Our #IWD gig on Weds, co-hosted with Who Run The World, was SUCH a great night! Finally I get chance to sit down and say a few words about it, for those who couldn’t make it …

First of all, The Menstrual Cramps played their first gig, sounding as tight and confident as if they’d been playing together for years. They reminded me a lot of DREAM NAILS – heartfelt rage channelled through their music, and bloody catchy songs. Keep finding myself singing “Let My Bush Be Free” on the school run, oopsie. 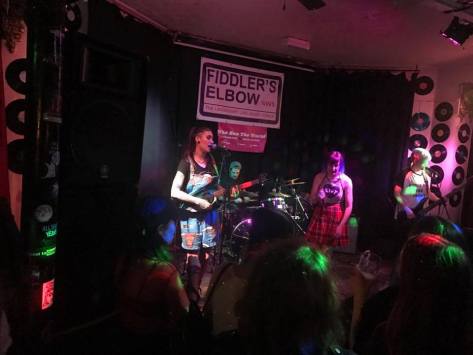 Next up were our Buffycore BFFs The Potentials, who once again proved themselves to be DIY ‘scene not scenery’ to the max – they turned up early, brought a load of drum gizmos, and Zach also provided £££s worth of brand new DVDs he’d swiped from work. Then they played a blinding set! LOUD WOMEN hearts this band big time. Catch them again next weekend – LOUD WOMEN volume 1: album launch party

Personal highlight of my own evening, as ever, was getting to do the raffle for the first time in ages. Don’t know why I love that so much but I really do! There were some excellent DVD + chutney prize combos won by lots of happy campers, and we helped top up the donations to Women’s Aid

Then finally, megababes Charmpit played their first headline show, and kicked the ass out of it! Spandex bikini-clad, they got everyone dancing with their infectious energy and humour. Their message at the end of the set was perfectly aligned with LOUD WOMEN’s core ethos: making music is fun and powerful, and *you can do it too* Hurray for Charmpit!

Charmpit – a beautifully riotous ending to an awesome evening ❤ #iwd2017

We’re still counting up the total raised on the night, as gremlins/the patriarchy seem to have crept in to Beth’s systems, but so far there’s £186 raised for Women’s Aid! I’ll update the total once we know more from WRTW.

Smashing the patriarchy, one battered sausage at time #iwd2017

To celebrate International Women’s Day, a sisterly partnership between LOUD WOMEN and Who Run the World promotions.

All profits to Women’s Aid.

by Beth White of Who Run the World

Can you describe your music in a few short words?

Holly: Buffy the Vampire Slayer themed queer diy pop
Shahnaz: chaotic, catchy funtimes for all
Zak: It’s queer, feminist pop punk. It’s all based in the Buffyverse but as with the show, everything is just an analogy for everything we experience in our daily life. Except maybe ‘Moloch’, that ones kinda specific to the show/90’s TV in general. (sorry that’s not a few or short words).

How did you all meet & decide to form The Potentials?
Holly: We met at a support group for people that can’t get over the 90s and decided we’d enable our Buffy obsession in a healthy way.
Shahnaz: It all began as an attempt to play the Buffy RPG, it turned out that was really hard because you’ve got to have a good DM and follow rules and stuff, so we instead we decided to channel our love of Buffy into some songs, and became the very band you see before you.
Zak: We all knew each other and ended up talking about Buffy awkwardly at parties, and then, as Shahnaz said, the RPG was too hard so we decided to try being a band! Worked out alright didn’t it!

Who are your influences?
Holly: Bruce Springsteen, Team Dresch, My Chemical Romance on repeat forever and ever.
Shahnaz: Az from ice shack in Manchester, and some bands.
Zak:

Keep being weird. (And The Spice Girls).

What exciting things did you get up to in the last year?
Holly: We recorded a new EP, made a pop video, went on tour, had a birthday party, had a spring fling, had our second annual Slayerfest, made a charity single, and rewatched all of Angel. It was bananas!
Zak: As above, so below PLUS we are an inordinate amount of hash browns.

What have we got to look forward to from The Potentials this year?
Holly: More songs, more tours, more hash browns for breakfast.
Shahnaz: A really good t-shirt with a cute animal on it!
Zak: PARAHOY (please Hayley?) plus loads of shows and feelings and new music!

(Assuming you are!) Why are you particularly looking forward to playing the Who Run the World/LOUD WOMEN show on 8th March for International Women’s Day?
Holly: One word: Charmpit.
Zak: All of it. Plus more Charmpit with everything please. LOUD WOMEN and Who Run The World have both been so supportive of us and so many good bands, so honestly, it’s gonna be the party to end all parties.

What is your take on the state of women’s representation in music right now?
Shahnaz: In the DIY scene women are properly doing it for themselves, I see oodles and caboodles of female bands making a start and making good. Unfortunately that doesn’t crossover into mainstream music, the handful of bands I see getting signed and getting representation still maintain the status quo in that they are mainly all male, and usually all white.
Zak: As a cis-but-sissy gay guy I won’t take up much space here except to say that all the women in the scene at the moment are REALLY FUCKING NAILING IT!!! Lots of pr

Where can people listen to your music & buy merch?
https://www.facebook.com/buffcore
https://thepotentialsuk.bandcamp.com/ 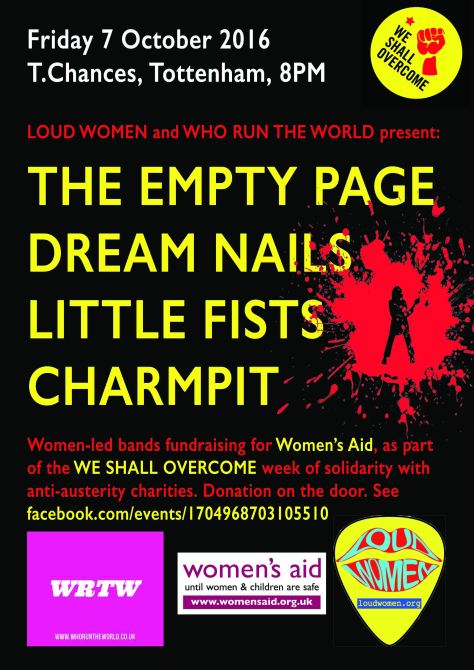 A sisterly joint-promotion by Who Run The World and LOUD WOMEN, together offering a night of doubly-awesome women-led music, in aid of anti-austerity charities.

THE EMPTY PAGE
www.facebook.com/Theemptypagemusic
A trio of Mancunians writing songs with an infectious pop sensibility, layered with a healthy dose of fuzz and shot through with ‘grim up North’ poeticism.

DREAM NAILS
www.facebook.com/yourdreamnails
Celebrating their 1 year band birthday – Dream Nails played their first gig at the We Shall Overcome gig last year, which was also the first ever LOUD WOMEN gig. So much to celebrate with our favourite punk witches!

Donations on the door to Women’s Aid – suggested minimum £5 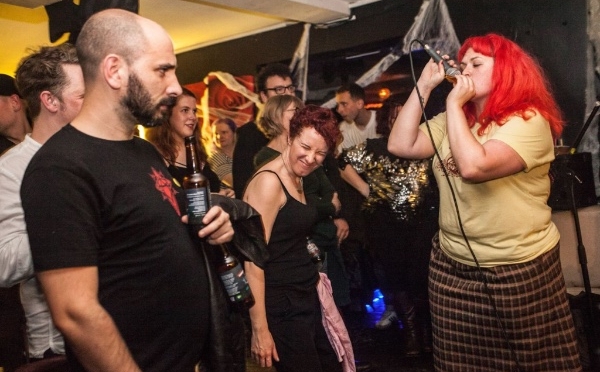