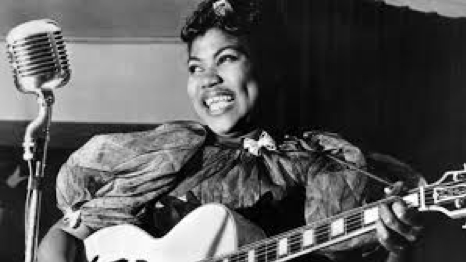 Look at any muso list of greatest musicians/albums/bands produced for the likes of Rolling Stone etc and you could be forgiven for thinking they are written by the same bloody person as they all contain the exact same entries. It makes you wonder why they continue to produce them at all. They are also depressingly lacking in women save for the odd nod to Stevie Nicks or Aretha Franklin. It’s always the same thing: Beatles/John Lennon? Check. Chuck Berry? Yep. Bob Dylan? Of course. And whilst I’m not so churlish to underestimate the impact that these acts have had on modern music, they did not operate within a vacuum and there are lots of other acts who have not got the credit that is owed to them. It doesn’t help that so many of these alternative artists keep getting whitewashed out of history by these unimaginative and unnecessary lists. Well, I’m here to rectify this! And I’m starting with I’m starting with the most ground breaking and important guitarist that no one in the mainstream knows and that’s Sister Rosetta Tharpe

I’ll be honest- I’m relatively new to the Tharpe party but now I’m here, I’ve happily passed out in the hallway and I’m never leaving. Tharpe was a forerunner of the rock n roll movement and her music influenced all those names we tend to see on all those exclusively male lists I hate so much- Jerry Lee Lewis, Elvis, James Brown, Johnny Cash. She mixed gospel, blues, folk and rock n roll and had the nickname the Queen of Soul.

She was born in 1915 in Arkansas to a musical but impoverished family of cotton pickers. Like many musicians of the day, she started out in church and was encouraged by her pastor mother to indulge her musical inclinations and was regarded by many as being a musical prodigy. She toured the American South from a very early age, gaining more live music chops by the age of 15 than many other musicians get in their whole lives.

Her early music was gospel in tone, fitting with her beginnings in a Pentecostal church but her predilection for the electric guitar meant a drift into rock n roll was inevitable.  Tharpe maintained an element of gospel sensibilities and spiritual leanings in her performances and lyrics throughout her career which often meant that she was shunned by the conservative Southern churches, particularly as she would play in nightclubs and other venues considered to be places of ill repute. Tharpe also had it tough being taken seriously playing guitar in a male dominated music industry- she was often given the backhanded compliment that she ‘played like a man’, a particularly galling comment considering she played far better than most of her male contemporaries.

What was her influence?

As mentioned above, it was considerable. She blazed so many trails she would have been a National Trust nightmare- early rock n rollers; Deep South musicians; women; African-Americans……all owe a debt to Tharpe and her relentless experimentation and prolific output. Her pioneering use of distortion on her electric guitar has been cited as an influence on Clapton and Hendrix and her powerhouse vocals have influenced many female singers from Aretha Franklin to Tina Turner.

Finally, her contribution to music has been recognised as more and more artists have been outspoken in identifying her talent and she was inducted into the Rock N Roll Hall of Fame in 2018, 45 years after her death of a stroke in 1973.