The story of punk and the story of queer are tied so closely together.  Bollox, the UK’s biggest Queer Alt. Club night and Rebel Dykes, a film in production about punk dykes from 1980s, are coming together to celebrate the history of punk and queer at HOME in Manchester on Sunday afternoon, on February 25th called Too Punk to be Queer.

Lucy Robinson, Punk Professor from Sussex University suggests that the word Punk is from the Polari (a gay slang) and meant a young virgin homosexual.  Kath McDermott, who is on the panel discussion as part of the event, produced a brilliant BBC podcast, “Queer as Punk”.  This tells the story of how early punk took its inspiration from the queer world. The Bromley contingent, which included Siouxsie Sioux and Billy Idol, socialised in a lesbian bar in Soho. The Ranch on Dale Street in Manchester is often mentioned as the true home of Manchester punk.  It was beneath drag bar Foo Foo’s Palace and was connected to the Foo Foo’s by a door behind the bar.  The Ranch was host to bands like Buzzcocks, The Fall and The Distractions. Lesbian and gay bars offered a sort of security to young punks in the 70s and 80s, and punk was a subculture which was welcoming to young queers.

“Punk in its very essence is queer,” said Tali Clarke, a London-based filmmaker and creator of the Pride Punx float, which recently took part in London’s annual pride parade. “It’s no labels, open and accepting and very anti-homophobic and anti-racist. In its essence, LGBTQ culture strives to be accepted and commercialized in the mainstream consciousness. Punk rock and alternative culture wants the very opposite of that.”

At the Bollox and Rebel Dykes event,  Queen Zee & The Sasstones are giving a rare acoustic performance to welcome the audience into the Cinema.   Queen Zee describes their music as, “a hardcore band playing pop music, or maybe a pop band playing hardcore music – it’s somewhere between there. It’s essentially just a noisy, angry, very lame band”.

As part of the event, Bollox and Rebel Dykes are bringing to HOME in Manchester one of the first UK showings of a documentary film directed by Berlin-based filmmaker Yony Leyser.  “Queercore: How to Punk a Revolution” is a feature-length snapshot into the music and magazines that gave voice to LGBTQ outsiders — those who didn’t subscribe to the dominant gay scenes erupting in vogue dance or macho dress, for example.  The rejection of mainstream gay culture and the full-throttled embrace of an alternative to the fight for widespread acceptance are among the defining characteristics of a queer underground scene born in the 1980s with punk rock roots.Leyser said that he was a freak, “I dressed different. I thought different. I was always rejected by society, and I also felt rejected by the gay community. I wanted to be an activist. I wanted to go to rock shows. I wanted to make art.”  “Queercore,” or “homocore,” was one of the gay punk movement that provided an answer. 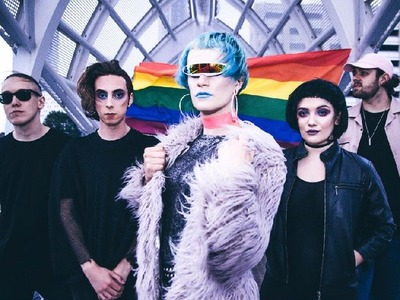 While having grown up in Chicago nearly a decade after his documentary’s timeline starts, Leyser’s experience of social isolation mirrors that of his film’s protagonists, Bruce LaBruce and G.B. Jones, who in the 1980s were two twenty-somethings living in Toronto who liked rock music and embraced their queerness. But LaBruce, now a well-known filmmaker and provocateur, and Jones, one of the founders of the all-female, post-punk band Fifth Column, didn’t exactly identify with gay culture at the time, relating more to the anti-establishment call of the punk movement.Leyser’s film is packed with archival footage and fresh interviews that educate his audience about queercore’s cultural significance. Southern California bands like Tribe 8 and Pansy Division, which would lay the groundwork to influence others like Green Day, Nirvana and Peaches, are among the groups featured in the film. These bands turned sexuality upside down, offering alternative representations to the mainstream, most noted today by transgender woman Laura Jane Grace, the lead singer of Against Me!.

“Rebel Dykes,” an upcoming documentary about punk lesbians in 1980s London. Siobhan Fahey, who is producing the film said, “I was a rebel dyke. I felt very excluded from mainstream society but also from the more mainstream lesbians who had, what we thought, were some problematic politics. They were very separatist and quite anti-men, and we just wanted to have a lot of fun, do drugs and have lots of sex and make music, which they seemed to disapprove of. So we created our own scene.”

Bollox and Rebel Dykes will be bringing together Kath McDermott,  and Susan O’Shea, who has written about Punk-Inspired Feminist Networks,  and Yony Leyser, to discuss the legacy and the future of queer punk music and subculture.